Violence Against Women: Why France Is Witnessing Large-Scale Protests

More than 100 women have been killed in France by their partners or ex-partners in 2021. 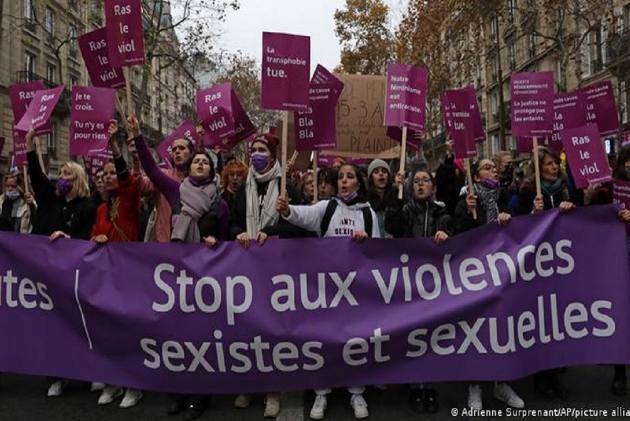 Large-scale protests across France on Saturday called on the government to do more to prevent violence against women.

The demonstrations come amid growing anger and discussions surrounding domestic violence. A woman is killed approximately every three days by their current or former partner in France.

The protesters marched through the streets of Paris and other cities. In the capital they walked behind a banner reading: "Stop sexist and sexual violence."

People carried placards with messages such as "down with the patriarchy," "transphobia kills," and "stop femicides!"

What are the protesters demanding?

Activists called on President Emmanuel Macron and his government to increase spending for the prevention of violence against women from €360 million ($406 million) to €1 billion.

They also urged more funding for shelters for women who experience domestic abuse. Currently, only around 40% of victims are offered a place in a shelter and only 12% get legal and psychological support, according to a report published by the Fondation des Femmes on Thursday.

Equality Minister Elisabeth Moreno defended the government's track record during an interview on Europe 1 radio on Saturday. She pointed to the 60% increase in emergency accommodation places, the training of police officers and the introduction of emergency phones for victims of violence.

Why are people protesting?

According to a study from 2017, more than 220,000 women are victims of sexual violence by current or former partners each year.

The groups that organized Saturday's protest said at least 101 women had been killed by their current or former partners since the beginning of 2021.

"We are always putting the blame on the women," one demonstrator in Paris told the AP news agency, adding that the situation for people trapped in domestic violence is difficult.

"What we forget is the phenomenon of being in one's grip ..." the demonstrator said. Little by little, it's like a spider that surrounds you in its web.''

Saturday's protest was part of a week of action around the world to mark International Day for the Elimination of Violence against Women on November 25.