The eruption of Mount Nyiragongo on Saturday night sent about 5,000 people fleeing from the city of Goma across the nearby border into Rwanda 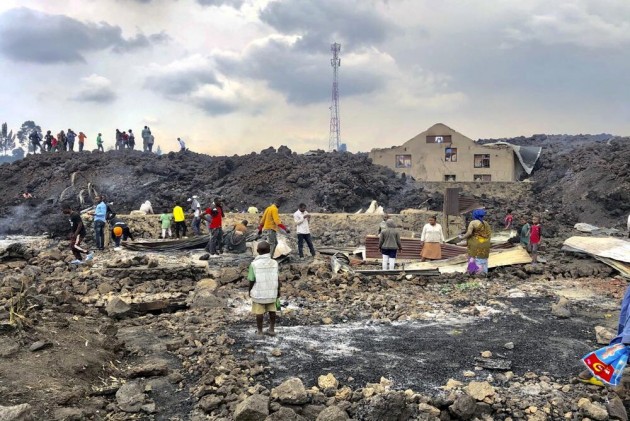 Torrents of lava poured into villages after dark in eastern Congo with little warning, leaving at least 15 people dead amid the chaos and destroying more than 500 homes, officials and survivors have said.

The eruption of Mount Nyiragongo on Saturday night sent about 5,000 people fleeing from the city of Goma across the nearby border into Rwanda, while another 25,000 others sought refuge to the northwest in Sake, the UN children's agency said Sunday.

More than 170 children were still feared missing Sunday and UNICEF officials said they were organizing transit centers to help unaccompanied children in the wake of the disaster.

Goma ultimately was largely spared the mass destruction it suffered the last time the volcano erupted back in 2002.

Hundreds died then and more than 100,000 people were left homeless.

But in outlying villages closer to the volcano, Sunday was marked by grief and uncertainty.

Aline Bichikwebo and her baby managed to escape when the lava flow reached her village, but said both her mother and father were among those who perished.

Community members gave a provisional toll of 10 dead in Bugamba alone, though provincial authorities said it was too soon to know how many lives were lost.

Bichikwebo says she tried to rescue her father but wasn't strong enough to move him to safety before the family's home was ignited by lava.

“I am asking for help because everything we had is gone,” she said, clutching her baby.

“We don't even have a pot. We are now orphans and we have nothing.”
The air remained thick with smoke because of how many homes had caught fire when the lava came.

“They don't even know where they are going to spend the night.”

Elsewhere, authorities said at least five other people had died in a truck crash while they were trying to evacuate Goma, but the scale of the loss had yet to be determined in some of the hardest-hit communities.

Residents said there was little warning before the dark sky turned a fiery red, sending people running for their lives in all directions. One woman went into labor and gave birth while fleeing the eruption to Rwanda, the national broadcaster there said.

Smoke rose from smoldering heaps of lava in the Buhene area near the city Sunday.

“We have seen the loss of almost an entire neighbourhood," Innocent Bahala Shamavu said.
“All the houses in Buhene neighbourhood were burned and that's why we are asking all the provincial authorities and authorities at the national level as well as all the partners, all the people of good faith in the world, to come to the aid of this population.”

Elsewhere, witnesses said lava had engulfed one highway connecting Goma with the city of Beni. However, the airport appeared to be spared the same fate as 2002 when lava flowed onto the runways.

Goma is a regional hub for many humanitarian agencies in the region, as well as the UN peacekeeping mission. While Goma is home to many UN peacekeepers and aid workers, much of surrounding eastern Congo is under threat from myriad armed groups vying for control of the region's mineral resources.