Watch: German Chancellor Merkel Alarmed As She Forgets To Wear Her Mask

While addressing the German parliament in Berlin, German Chancellor Angela Merkel rushes back to fetch her mask as she forgets to wear it 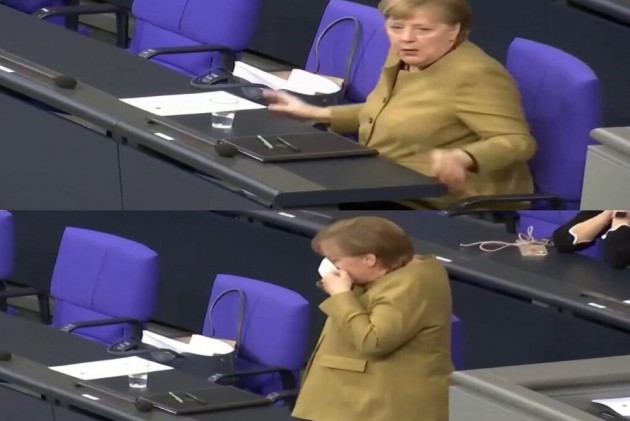 In a viral video, German Chancellor Angela Merkel is seen panicking soon after she forgets to wear her mask while addressing the country’s parliament, the Bundestag, in Berlin earlier this week. The viral video features Merkel rising to address lawmakers on the government’s response to the pandemic and is seen rushing back to the podium to fetch her mask.

At the moment called by some as  "the only time the great lady ‘panicked during her time as German Chancellor", Merkel was seen holding back her laughter while wearing back her mask. The video was shared by the Reuters news agency and several people are sharing it further, calling it a relatable moment.

Angela Merkel panics as she forgets her face mask on the lectern after a speech pic.twitter.com/qC4GAeWpVt

So responsible, a real leader. I wish Brasil had a leader like her.

Never happens to you? God bless her. Some leaders never really bother. https://t.co/UeqBTquibT

What a responsible leader https://t.co/QbEdBQrcIE

Prob. the only time the great lady ‘paniced’ during her time as German Chancellor !! https://t.co/07ueTfixo2

A Scientist. A leader. Leading by example. https://t.co/poGzelmySD

Angela Merkel’s face is basically all of us. https://t.co/1vSZaiwc1T

Chancellor Angela Merkel is such a great and inspirational leader. I adore her leadership skills,resilience,decency and generosity.
May God grant her peace of mind and good health. https://t.co/h10kVa92OZ