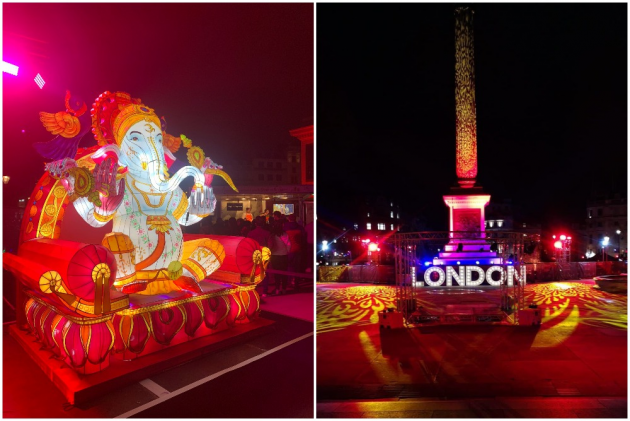 The Indian diaspora in the United Kingdom has celebrated Diwali in London's busy Trafalgar Square on Saturday, bringing cheer and joy to Indians across the UK.

The celebrations started at 4 pm and went on till 10 pm. Images and videos on social media showed the iconic square lit up with festive lights, festoons and decorations. The festivities included Asian and Indian food as well. The event included video addresses from political personalities like London Mayor Sadiq Khan among others.

Images of the festivities went viral as several Londoners both from and outside the Indian diaspora visited the event and shared memories on the microblogging site Twitter.

The Soni clan are celebrating #Diwali in London at Trafalgar Square. pic.twitter.com/rdUL1ZlWGz

Lovely afternoon/evening out with @Isobel6174, including Diwali celebrations in Trafalgar Square. pic.twitter.com/AKPBCwIg6z

Trafalgar Square is already basking in the festive lights. Catch the live action at https://t.co/FN8q9g743u pic.twitter.com/GjZtN8k0kQ

I love @DiwaliLondon and missed it very much last year! It was superb again this year! ðÂÂÂÂÂÂÂÂÂðÂÂÂÂÂÂ½ðÂÂÂªÂÂÂ ðÂÂÂÂÂÂÂÂÂ#Diwali #London pic.twitter.com/OvIsgbXnac

The office of London Mayor Sadiq Khan organised Diwali at Trafalgar Square on Saturday to celebrate the cultural diversity of the city, Anirban Mukhopadhyay, spokesperson of Heritage Bengal Global, an association of expatriate Bengalis said.

"The event was themed on the victory of good over evil after the severe trauma caused by Covid-19 in the last one-and-a-half years," Mukhopadhyay said.

The traditional 'alpona' work by Heritage Bengal Global vice president Mahua Bej was selected for being part of a collage at the centre of the square, he said.

Mukhopadhyay, who is presently in Kolkata, said that the event was a part of their endeavour to globally showcase the rich cultural heritage of West Bengal.