Watch: Over 12,000 Musicians Set The Record For World's Largest Orchestra In Venezuela

The orchestra network known as El Sistema, or The System, assembled some 12,000 musicians for the concert which recently broke the Guinness World Record. 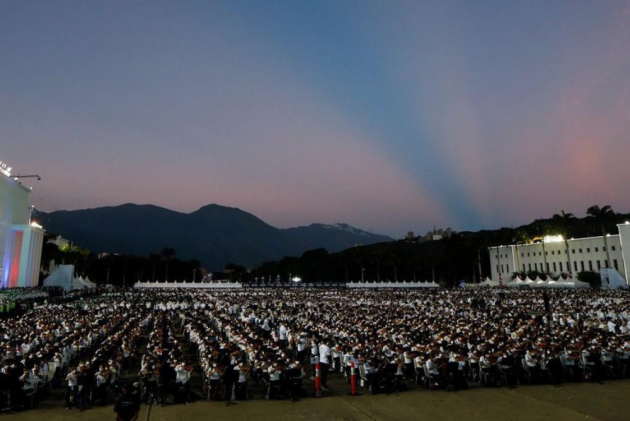 Thousands of Venezuelan musicians, most of them children and adolescents, have earned the title of the world's largest orchestra.

Guinness World Records in a video released Saturday announced that the musicians, all connected to the country's network of youth orchestras, earned the designation with a performance a week earlier of Tchaikovsky's “Slavonic March".

Thousands of musicians in Venezuela are hoping to have set a record by performing as part of the world's largest orchestra. pic.twitter.com/nOgci1mp8L

The musicians, ranging in age from 12 to 77, attempted the record during a patriotic concert at a military academy in the capital of Caracas. To set the record, more than 8,097 had to be tallied playing at the same time during a five-minute period of Tchaikovsky's piece.

The network of orchestras known as El Sistema, or The System, assembled some 12,000 musicians for the concert. The repertoire included “Venezuela” by Pablo Herrero and Jose Luis Armenteros, the South American country's national anthem and Pedro Gutierrez's “Alma Llanera”, which Venezuelans consider their unofficial anthem.

More than 250 supervisors were each assigned a group of musicians to observe during the record attempt.

The previous record belonged to a Russian group that played that country's national anthem.