"All achievements of the last 20 years in Afghanistan have been lost. Nothing is left. It's zero now," Sikh Afghan Narendra Singh Khalsa said soon after his arrival at Hindon Airport. 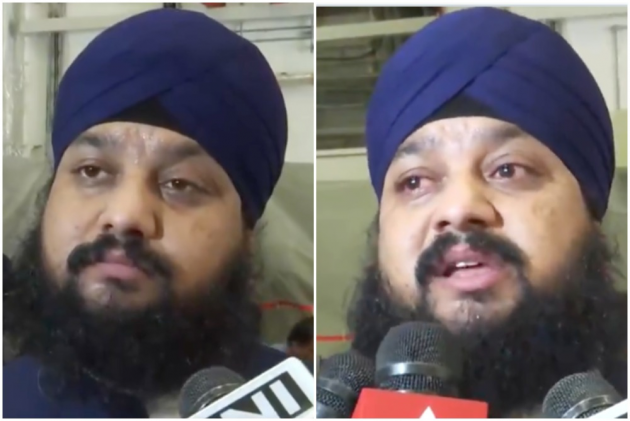 As several Indian origin Afghans returned to the country on Sunday following a harrowing brush with the Taliban, several were lost emotional upon landing in the country. The Indian Air Force evacuated 168 persons including over a hundred Indians from Afghanistan on Wednesday while 87 others who had previously been evacuated to Tajikistan were also headed toward India.

However, the mood was sombre at Hindon Airbase where the special repatriation flight landed. Sikh Afghan lawmaker Narendra Singh Khalsa, who was one of the evacuees, could not control his emotions and broke down on camera.

"All achievements of the last 20 years in Afghanistan have been lost. Nothing is left. It's zero now,"  Khalsa said soon after his arrival.

IAF Brings Back 168 People From Afghanistan Including 107 Indians

Khalsa and senator Anarkali Honaryar as well as their families were among those flown out of Kabul in a C-17 heavy-lift aircraft of the Indian Air Force (IAF) this morning.

The Sikh lawmaker thanked the Indian government for rescuing him, his family and several other members of his community following the Taliban's takeover of Kabul and most parts of Afghanistan.

"India is our second home. Even if we are Afghans and live in that country, people often call us Hindustanis," the lawmaker told reporters at the airbase near Delhi.

Asked about the current situation in Afghanistan and how he felt about the latest developments in the country, Khalsa, with tears in his eyes, said all the gains of the past 20 years have been undone.

"I feel like crying. Everything is finished. It is a very difficult and painful decision to leave the country. We have not seen such a situation. Everything has been snatched away. It's all over," he said.

"I feel like crying...Everything that was built in the last 20 years is now finished. It's zero now," he says. pic.twitter.com/R4Cti5MCMv

The Taliban took control of Kabul and almost all major cities and provinces of Afghanistan 20 years after it was ousted by a US-led military coalition following the 9/11 attacks.

Recalling the harrowing experience of the past seven days after the Taliban took control of Kabul, Khalsa said the situation is "very bad" and appealed to the Indian government to rescue the remaining stranded Hindus and Sikhs from the war-torn country.

"Situation is very bad. We had to face a lot of difficulties. Thank God for saving our lives as we had to face harrowing times in the last few days. My expectation from the Indian government is that all those who are still stuck are brought back," he said.

"The Taliban used to ask us to remain in Afghanistan saying your security is our responsibility. As there are so many groups of Taliban, we do not know whom to speak to and whom to believe. That's why we decided to leave as the situation is serious," he added.

Khalsa said almost all Indians and Afghan Sikhs were taking shelter at gurudwaras in Kabul and elsewhere and that some 200 other Indians and Indian-origin people are waiting to be rescued.

"The gurudwaras are serving people by providing shelter and food. We are worried about our people who are still staying there," he said.

Asked about the brief detention of Indians and the Afghan Sikhs and Hindus on Saturday by the Taliban when they were on their way to the Kabul airport, he said all of them had to face harrowing experiences.

"They separated us from the Indians...In each of the gates at the airport, 5000-6000 people were standing. Initially, we could not go inside," he said.

"A person from Taliban harassed us. Then we left the place and came to a gurudwara. Our Indian friends were also harassed. It was difficult to understand who was a good person and who was bad. Then around 8 at night, we entered the airport by a VIP entry point," he added.

Khalsa said the temples and gurudwaras in Afghanistan are unharmed and safe so far.

India on Sunday brought back nearly 400 people, including 329 of its nationals, in three different flights as part of its efforts to evacuate its citizens from Kabul.

A total of 168 people including 107 Indians and 23 Afghan Sikhs and Hindus, were flown from Kabul to Hindon airbase near Delhi in a C-17 heavy-lift military transport aircraft of the IAF.

Another group of 87 Indians and two Nepalese nationals were brought back in a special Air India flight from Dushanbe, a day after they were evacuated to the Tajikistan capital in an IAF aircraft, officials said.

Separately, a group of 135 Indians who were earlier evacuated from Kabul to Doha in the last few days by the US and NATO aircraft, were flown back from Doha to Delhi on a special flight, they said.

India carried out the evacuation missions in coordination with the US and several other friendly countries.

Two days after the Taliban seized control of Kabul, India evacuated 200 people including the Indian envoy and other staffers of its embassy in Kabul in two C-17 heavy-lift transport aircraft of the IAF.

The first evacuation flight brought back over 40 people, mostly staffers at the Indian embassy, on Monday last.

The second C-17 aircraft evacuated around 150 people including Indian diplomats, officials, security personnel and some stranded Indians from Kabul on Tuesday.

The Taliban swept across Afghanistan this month, seizing control of almost all key towns and cities including Kabul in the backdrop of the withdrawal of the US forces.

Following the evacuation, the MEA said the focus now would be to ensure the safe return of all Indian nationals from the Afghan capital.