'We Are At War And Not Winning': UN Chief Calls For Wartime Plan To Fight Coronavirus

The UN chief appealed for the lifting of sanctions that can undermine countries' capacity to respond to the Coronavirus pandemic. 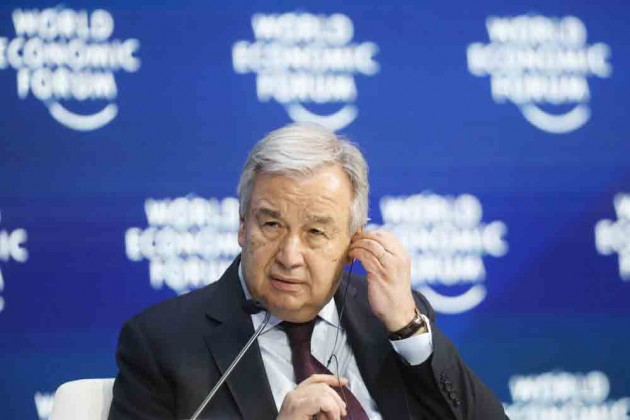 While UN Secretary-General Antonio Guterres has told the Group of 20 (G20) leaders on Thursday, "We are at war with a virus -- and not winning," UN entities around the world are unrelenting in providing aid to fight COVID-19. "This war needs a wartime plan to fight it," he told a virtual meeting of G20 leaders.

"Solidarity is essential among the G20 and with the developing world, including countries in conflict," the UN chief said on Thursday.

"All countries must be able to combine systematic testing, tracing, quarantining and treatment with restrictions on movement and contact, aiming to suppress transmission of the virus. And they have to coordinate the exit strategy to keep it suppressed until a vaccine becomes available," the UN chief said, Xinhua reported.

He asked for massive stimulus to minimize the social and economic impact of the pandemic, and for support for developing countries in increasing their response capacity.

Guterres also appealed for the lifting of sanctions that can undermine countries' capacity to respond to the pandemic.

During a virtual press briefing, Stephane Dujarric, chief spokesman for Guterres,  elaborated on some of those conflicts and on other countries where the world organization is fighting the virus.

"We are deeply concerned about the potential impact of the virus on millions of people across Syria and particularly the over 900,000 people who remain displaced due to hostilities since December 1 in the country's northwest," he said.

The World Health Organization (WHO) said the displaced live in overcrowded conditions that make them particularly vulnerable to respiratory infections. There are currently over 6 million internally displaced people throughout the country.

The WHO is responding across Syria to prepare laboratories and isolation wards and to inform the public. Health facilities and selected intensive care units are being prepared and communities most at risk have been identified.

A particular focus has been given to the northwest of the country where the WHO is shipping in additional ventilators and personal protective equipment to better cope with the strain on health care, the spokesman said.

The United Nations is very worried by the confirmation of the first COVID-19 case in Libya, the spokesman said.

A possible outbreak could overwhelm the already-stretched humanitarian aid capacity, he said. The UN, supporting authorities in COVID-19 preparedness, is alarmed that hostilities have continued in and around Tripoli despite a recently announced humanitarian pause.

UN agencies are working with the government on preparedness and response measures, disease surveillance, lab and research protocols, risk communications, training on infection prevention and a control and cluster containment plan, as well as surveillance and tracking of travelers, Dujarric said.

The UN Educational, Scientific and Cultural Organization has launched a global education coalition to support countries in scaling up their distance learning practices and reaching children and youth who are most at risk.