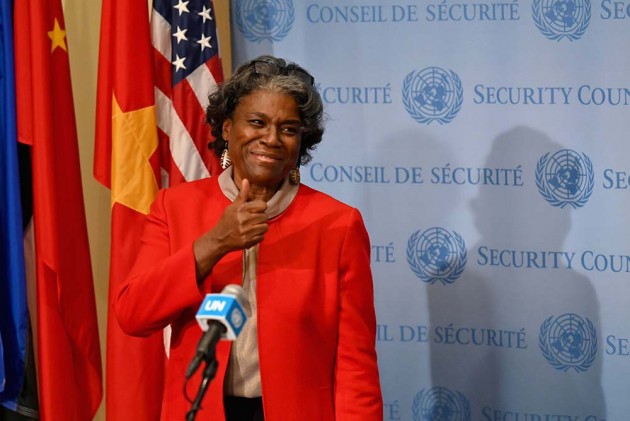 US Ambassador Linda Thomas-Greenfield told the UN Security Council the world “should not be fooled by Syria's veneer of cooperation” while it deliberately delays and obstructs answers to the international chemical weapons watchdog.

France's UN Ambassador Nicolas De Riviere went further, saying Syria is not only not cooperating with the Organization for the Prohibition of Chemical Weapons but it has continued to use chemical weapons.

“And these facts must be qualified as crimes against humanity,” he said.

Syria joined the Chemical Weapons Convention in September 2013, pressed by its close ally Russia after a deadly chemical weapons attack that the West blamed on Damascus.

A Security Council resolution adopted at that time endorsed the decision of the OPCW, which implements the convention, to destroy Syria's chemical weapons program and banned Syria's use, development, production or acquisition of chemical weapons.

UN disarmament chief Izumi Nakamitsu told the council Wednesday that 20 of the 24 outstanding issues in the declaration opened by the OPCW in 2014 remain unresolved.

They not only include the undeclared production and possible weaponisation of toxic chemicals but the unknown whereabouts of significant quantities of chemical warfare agents and munitions.

Nakamitsu said the OPCW also has not received a requested declaration on undeclared nerve agents produced at a former chemical weapons facility that Syria declared “as never having been used to produce and/or weaponise chemical warfare agents,” and other requested information.

She called on Syria to respond to the organization's requests “as soon as possible” and to allow all members of its team analysing the declaration “unfettered access,” citing the government's refusal to grant a visa to one member.

He called it “a disturbing reality” that eight years after Syria joined the Chemical Weapons Convention, many questions remain about its initial declaration of its weapons, stockpiles and precursors, and its ongoing programme.

In April 2020, OPCW investigators blamed three chemical attacks in 2017 on the Syrian government, which it has vehemently denied.

The OPCW Executive Council responded by demanding that Syria provide details. When it didn't, France submitted a draft measure on behalf of 46 countries in November 2020 to suspend Syria's “rights and privileges” in the global watchdog.

In an unprecedented vote on April 21, 2021 the OPCW suspended Syria's rights until all outstanding issues are resolved.

Nakamitsu said Wednesday that unfortunately Syria hasn't completed any of the measures required by the OPCW for reinstatement.

She reiterated her call for Syria's government to cooperate with the chemical weapons watchdog.

Syria's UN Ambassador Bassam Sabbagh told the council his government “rejects any attempt to question the Syrian declaration and serious cooperation with the OPCW and its technical secretariat.”

As for the OPCW's findings, he said, “we reject any baseless accusations that rely on erroneous information and any attempts to jump into conclusions based on misinterpretations and probabilities without relying on accurate physical evidence.”

Sabbagh also accused council members of distracting attention from an Israeli attack on a declared chemical weapons facility, which led to the destruction of two chlorine cylinders that had been linked to a 2018 deadly attack on the Syrian town of Douma.

Russia's deputy ambassador Dmitry Polyansky claimed there has been “no scientifically based evidence” refuting that Syria's chemical potential was eliminated.

He also denounced the OPCW's investigative methods and accused the organisation and Western nations of politicising the issue and “turning a blind eye to the topic of the use of chemical weapons by terrorists in Syria and neighbouring states.”

Britain's UN Ambassador Barbara Woodward countered that expert investigations confirmed that Syria used chemical weapons including chlorine and Sarin on at least eight occasions since its conflict began in 2011, attacks that killed and injured hundreds of innocent people.

Islamic State terrorists were found to have used chemical weapons on three occasions, she said.

Alluding to Russia's threatened veto on any council action to hold Syria accountable and its “concerted disinformation campaign to malign and undermine the OPCW findings,” Woodward called on council members to “put aside narrow political motivations and unite behind the full implementation” of the 2013 resolution in 2022.