A crucial meeting of the ruling communist party to decide the political future of Oli was postponed for the fourth time on Friday, citing floods in the country. 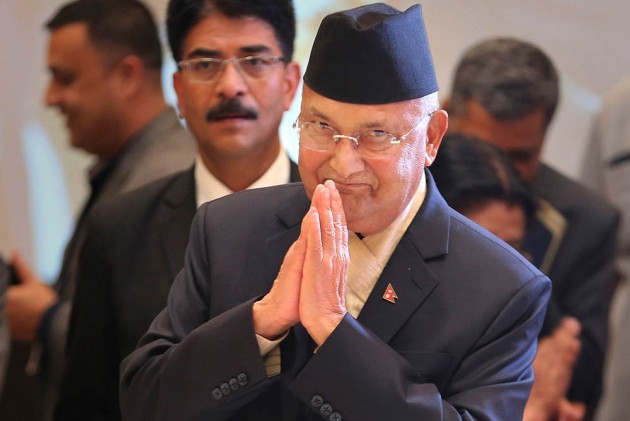 Embattled Prime Minister K P Sharma Oli on Friday said he will make "every effort" to consolidate national unity and protect the territorial integrity of Nepal and asserted that it is the duty of the ruling communist party and its leaders to resolve the internal matters and disputes.

A crucial meeting of the ruling communist party to decide the political future of Oli was postponed for the fourth time on Friday, citing floods in the country, amidst calls for his resignation over his style of functioning and anti-India statements.

The meeting of the Nepal Communist Party’s 45-member powerful Standing Committee was scheduled to be held on Friday. But it was postponed for a week at the last moment. In his address to the nation, Oli said "such debates, discussions and differences are normal within a political party".

"I will assure all that I will make every effort to consolidate national unity, protect democratic republic and uplift national pride," he said.

"I will also commit myself to protect national sovereignty and territorial integrity. My all efforts are directed towards saving the lives of the people and their property during the time of disaster," he said.

"The government under my leadership will not deviate from its duty to protect the people from disaster and hunger," he said.

At least 22 people have been killed in multiple landslides in Kaski, Lamjung and Rukum districts in the country’s western region.

It is the fourth time that the crucial NCP meeting has been postponed. On Wednesday the meeting was postponed to Friday.

The differences between the two factions of the NCP, one led by Oli and the other led by party's executive chairman 'Prachanda' on the issue of power-sharing, has recently intensified after the prime minister unilaterally decided to prorogue the budget session of Parliament.

The political future of 68-year-old Oli is now expected to be decided on July 17 during the Standing Committee meeting, amidst the growing involvement of Hou Yanqui, the Chinese ambassador to Nepal, to save his chair.

The India-Nepal bilateral ties came under strain after Defence Minister Rajnath Singh inaugurated a 80-km-long strategically crucial road connecting the Lipulekh pass with Dharchula in Uttarakhand on May 8.

India termed as "untenable" the "artificial enlargement" of the territorial claims by Nepal. India has handed over a diplomatic note to Nepal over the map issue, Nepalese media reports said.