With Positivity Rate At 44%, Nepal Stares At Covid Catastrophe 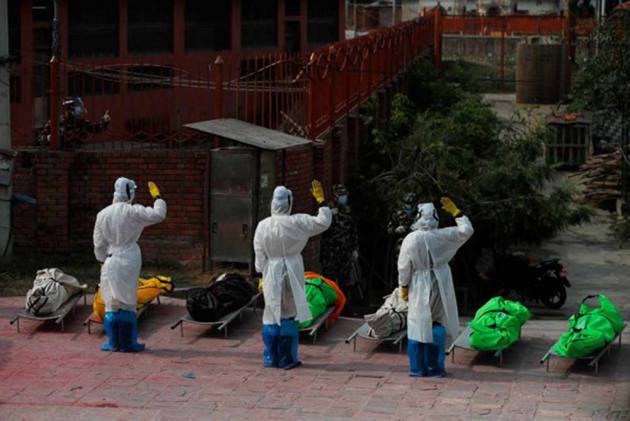 A devastating second wave of the Covid pandemic has left Nepal facing a massive humanitarian crisis as the Himalayan country grappled to provide oxygen, hospital beds and vaccines to millions of people at the mercy of the killer virus.

Oxford University’s data tracking site has showed a staggering 668 per cent increase in confirmed Coronavirus cases in the two weeks leading to May 1, compared to the previous fortnight. Similarly, the Red Cross reported a positivity rate of 44 per cent across the country of 30 million people.

On Friday, Nepal reported 8,607 new cases of COVID-19 along with 177 deaths. With less than 10 per cent of the population fully vaccinated, experts are warning of a serious crisis in the next few weeks. While India’s second Coronavirus wave has alarmed the world, the situation is just as dire in Nepal, prompting the United Nations Health chief to express worry about the country’s unfolding crisis.

The country’s crippling health system has been overwhelmed by the sudden spike in cases. In capital Kathmandu, hospitals are flooded with patients lying on the ground gasping for oxygen. Many private and community hospitals have refused to take any more patient due to lack of oxygen.

“The situation is frightening and out of control,” said Roman Pandit, a doctor at a hospital in Kathmandu. He said that the hospital is flooded with patients requiring ventilators and intensive care. “I have never seen such a helpless situation before. Every day, more people are dying and I am helpless.”

Nepalgunj, a city bordering India, has witnessed a sharp surge in new cases. An average of 10 people are dying every 24 hours in the district, according to local media reports. “The situation is frightening and out of control,” Prakash Thapa, a doctor at Bheri hospital in Nepalgunj was quoted as saying. He said the hospital is flooded with patients requiring ventilators and intensive care.

Nepal currently has only 1,600 ICU beds and fewer than 600 ventilators, with just 0.7 doctors attending to 100,000 people, according to a report by ActionAid Nepal. The country doesn’t have the resources to produce oxygen and imports shipment has been halted due to closure of the borders. Landlocked and sandwiched between China and India, Nepal depends on India for most of its supplies, especially medical equipment and liquid oxygen.

Nepal’s vaccination campaign, which began in January, is also facing uncertainty after only half of the ordered supplies from India were delivered. Nepal ordered 2 million doses of the AstraZeneca vaccine, produced by India, in February. China also pledged 80,000 doses of vaccines which took time to arrive. Then, as India was hit by the second wave, it halted vaccine exports, citing its growing demand at home.

The government of Nepal has now intensified efforts to acquire vaccines from other countries like the US, UK, China, and Russia.

People of Nepal have also launched an online petition demanding that the US provide vaccines as the country struggles to contain the devastating second wave. “With only 4 per cent of the population vaccinated and with India deep in crisis, it is unlikely that Nepal will receive more vaccines from what was previously its primary source,” the petition states. “We, therefore, request that the United States government immediately release at least 12 million doses of vaccine to the Government of Nepal to assist it in protecting the population.”

The White House has said that the US would be sharing 60 million doses of AstraZeneca vaccines with the world once it clears federal safety reviews.