One Dead, At Least 27 Injured In Venezuela May Day Clashes

In Tuesday's clashes, one person was killed and dozens injured, according to human rights monitors. More than 150 people were arrested. 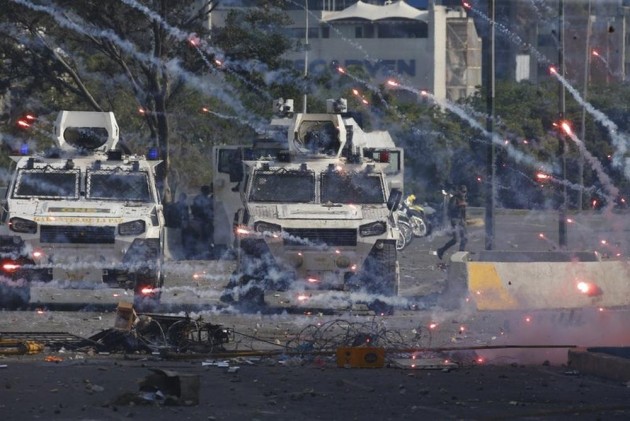 A woman was shot dead and more than two dozen people were injured during May Day clashes, between opposition supporters and Venezuela's armed forces in Caracas on Wednesday, with opposition leader Juan Guaido, attempting to rally demonstrators against President Nicolas Maduro.

Jurubith Rausseo, 27, died at a clinic after being hit by a "bullet in the head during (a) demonstration," the non-governmental Venezuelan Observatory of Social Conflict said on Twitter.

It condemned her "murder," after health services earlier reported at least 27 people injured in Wednesday's clashes, including one person with a gunshot wound.

Tensions in Venezuela have soared since Guaido, who heads the National Assembly legislature, invoked the constitution to declare himself acting president on January 23, claiming Maduro's re-election last year was illegitimate.

National Guard troops fired tear gas at stone-throwing protesters, attempting to block a highway close to the airbase in eastern Caracas, where Guaido had tried on Tuesday to spark a military uprising.

A second day of confrontations between opposition supporters, and Maduro's security services came, as the United States said it was prepared to take military action, if necessary, to stem the crisis in the South American nation.

At least one journalist was injured when National Guard soldiers fired rubber bullets at a group of reporters covering the clashes.

Miguel Ramirez, 17, told AFP at one medical centre that he had been shot in the foot while protesting on the highway near the La Carlota air base.

Guaido rallied his supporters in Caracas in the Labor Day demonstrations, urging them to stay in the streets.

His appeal came despite the apparent failure the day before of a revolt by some soldiers and members of the Bolivarian National Guard, who joined his side.

In Tuesday's clashes, one person was killed and dozens injured, according to human rights monitors. More than 150 people were arrested, the government and human rights organizations said.

UN Secretary-General Antonio Guterres, warned Venezuela's authorities not to use deadly force against demonstrators, while the US and Russia accused each other of making the crisis worse, evoking Cold War confrontations of the past.

Lavrov, in turn, charged that US interference was "destructive" and "in flagrant violation of international law."

"There is nothing for workers to celebrate," Guaido told supporters in the oil-rich country suffering from hyperinflation and food and medicine shortages that have driven millions to flee.

"We're going to remain in the streets until we achieve freedom for the Venezuelan people,” he said.

"The regime will try to increase the repression. It will try to persecute me, to stage a coup d'etat," added Guaido, recognized by more than 50 countries as the country's interim president.

He said staggered industrial action would begin on Thursday, leading to a general strike.

Before thousands of his own supporters in front of Miraflores palace on May Day, Maduro declared he will have "no hesitation" to lock up those responsible for this "criminal coup d'etat," threats, recalling those he made the previous day.

In his Wednesday address, Maduro alleged that the "so-called coup d'etat" had been organized "from the White House" by US National Security Advisor, John Bolton.

Hours after the revolt by military members appeared to have fizzled out, Pompeo told CNN he believed Maduro was ready to flee to ally Cuba before he was dissuaded by Russia, a claim Maduro later refuted as "a joke." A senior Brazilian official said at least 25 Venezuelan troops had sought asylum at its Caracas embassy.

Venezuela's security forces number around 365,000, including military and police, as well as 1.6 million civilian reservists.

Pompeo said on Wednesday, that Washington wants a peaceful transfer of power, but warned that US President Donald Trump is prepared to take military action if necessary.

"The president has been crystal clear and incredibly consistent. Military action is possible. If that's what's required, that's what the United States will do," Pompeo told Fox Business Network.

Venezuela has suffered five years of recession marked by shortages of basic necessities, as well as failing public services, including water, electricity and transport.

"I believe the people in the streets will be the straw that breaks the camel's back,” she added.

Another demonstrator, Patricia Requena, 40, said that "yesterday we saw soldiers recognizing our interim president. We have to stay in the streets.”

She vowed, "I'll keep demonstrating as long as God allows me to." Michael Shifter, an analyst with the Inter-American Dialogue, told AFP the US approach to Venezuela was "unhelpful and often counterproductive."

"The US is right to back Guaido in his battle against Maduro," said Shifter.

"But beyond being on the right side, the administration is making it harder, not easier, to achieve a democratic transition in Venezuela," she added.