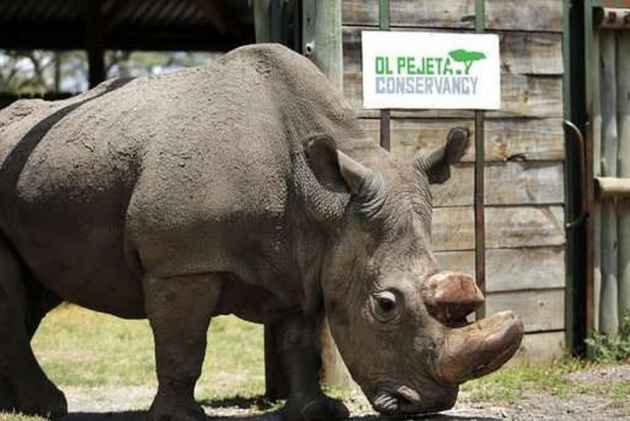 The 45-year-old Sudan was suffering from severe health complications that arose due to age-related infections, as per the Guardian.

Sudan, the "gentle giant", who lived in the Ol Pejeta Conservancy in Kenya, was put down on Monday after the pain from a degenerative illness became too great. He is survived by his daughter and granddaughter named Fatu and Najin.

Late Sudan had made headlines worldwide when, in an effort to raise funds for the conservation of the sub-species, dating app Tinder named him the 'most eligible bachelor in the world'.

An age-related infection was detected on its right hind leg in 2017, which was gauged and treated in January, following which it resumed normal movement, as told by Ol Pejeta.

A secondary infection was developed beneath the initial one and has left the rhino unresponsive to treatment.

The veterinary team said they had euthanised Sudan after his condition worsened over the weekend, leaving him with bad skin wounds. The rhino was unable to stand and was visibly suffering.

In a try to preserve the species, genetic material was collected from Sudan before he was euthanised.

The staff of Ol Pejeta Conservancy hope that, through "advanced cellular technologies" and IVF, his death will not signal the end of the species.

Sudan, who was 45, survived the species' near-extinction in the 1970s and was taken to Dvur Kralove Zoo in the Czech Republic. He was eventually moved back to Africa and, according to those who worked in the Ol Pejeta Conservancy, "stole the heart of many with his dignity and strength".

The population of the northern white Rhino was destroyed by uncontrolled hunting during the colonel era.

Poaching has been singled out as the primary cause for the dwindling number of 'exotic' animals in the world, including rhinos.

Beliefs that rhino horns have the ability to cure numerous ailments, added with the fact that their horns, according to experts, are costlier than many drugs, poachers have long targeted rhinos around the world for their lucrative horns.