Most akharas have a strong Hindu element in both their symbols and their membership. 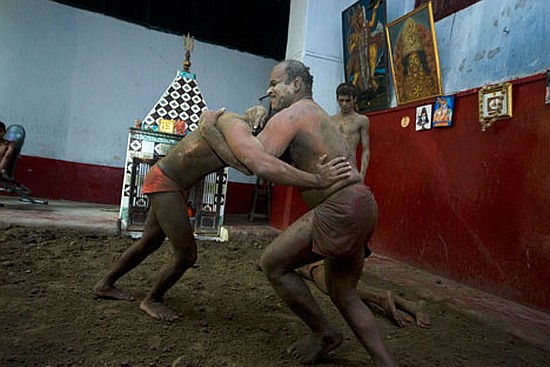 Wrestling is perhaps the best place to begin an assessment of contemporary Indian sports. It is the only mainstream sport that has existed in India for several centuries without interruption. Traditional wrestling continues to flourish in akharas across north India as well as in dangals (wrestling tournaments). In 2011 when I visited the Chandgi Ram akhara in Old Delhi, named after the legendary wrestler who won a gold medal in the Asian Games and is now managed by his son, and the Bara Ganesh akhara in Banaras, one of the sites of Joseph Alter's pioneering study, it was obvious that wrestling is alive and well in India. Dangals —whose organization and political economy Alter has described in detail—also continue to be big draws in the villages of Uttar Pradesh, Haryana, Punjab, Madhya Pradesh, and Maharashtra, with the prize money sometimes rising to a substantial Rs 100,000 per bout.28  Alter distinguishes between "ticket" dangals , in which organizers sell tickets and aim to make a profit, and "khula" dangals , which are free and open to everyone.29 A body called the Indian Style Wrestling Association (as opposed to the Wrestling Federation of India, which is in charge of the wrestling in the Olympics and other international tournaments) nominally oversees the dangals.30 What is noteworthy is the patronage of dangals by politicians. The former Uttar Pradesh chief minister and prominent national politician, Mulayam Singh Yadav, who was a pehelwan in his younger days, sponsors an annual dangal in his home constituency of Etawah. Other politicians, like the Chautalas of Haryana, underwrite dangals in their state. This shows the powerful hold that traditional wrestling has over wide swaths of northern and western India, prompting politicians to be associated with competitions. As P. Sainath said about wrestling in Maharashtra, " Kushti is located at the intersection of sports, politics, culture and economy in the rural regions of this state."31

Also finding pride of place are the religious symbols associated with wrestling. A shrine dedicated to Lord Hanuman is mandatory in most akharas ; even the 2012 National Wrestling Championship in Gonda, Uttar Pradesh, was held with a giant cutout of a garlanded Hanuman in the background.32 Most akharas have a strong Hindu element in both their symbols and their membership. In his study of the akharas in Banaras, Alter found that all the wrestlers were Hindus, with 50 percent of them Yadavs, 20 percent Bhumihars, 15 percent Brahmins, and the rest divided among several lower castes.33 Another scholar, Norbert Peabody, who studied akharas in Kota in the western state of Rajasthan, found that Hindu and Muslims trained in separate akharas.34 Furthermore, the lower castes and the former untouchables, or Dalits, had their own akharas. This, of course, raises the question of the link between wrestling and Hindu nationalism. While Alter believes that the structure of akharas and the worldview of wrestlers are inimical to the sort of Hindu nationalism advocated by organizations like the Rashtriya Swayamsevak Sangh,35 others, like Peabody, have documented the role of wrestlers in collective violence and riots.36

What has changed over time is the increasing coexistence in the traditional akharas of the brown earth with artificial mats, which is what international wrestling is conducted on, and modern weight-training equipment. This is a response to the success of Indian wrestlers and the demands of preparing for international tournaments. Sushil Kumar, India's wrestling superstar who has not only won two Olympic medals but has also been a world champion in his weight category, is a good example of the meeting of tradition and modernity. Born in Baprola, a small village on the outskirts of Delhi, Sushil began his training at the age of twelve in an akhara in Delhi run by the wrestling legend Satpal Singh, who himself won a gold medal in the 1982 Asian Games. Sushil initially trained in the mud pits of the akhara before switching to imported Olympic-standard mats. Since his Olympic success, Sushil has won endorsements—a rarity for non-cricket players—for several companies, including Mountain Dew, Eicher tractors, and the National Egg Coordination Committee.37 Sociologist Shiv Visvanathan characterized Sushil's appeal as bridging tradition and modernity: "Boost [an energy drink] does not spell the secret of his success and Bournvita does not assure his future. He is as local as desi ghee but is quietly global."38

Sushil also is part of an age-old guru-shishya (master-disciple) tradition. While he learned the art of wrestling from Satpal (who, incidentally, later became his father-in-law), Satpal in turn learned his craft from another legend, Guru Hanuman, whose trainees have won several international medals. Indeed, Alter named Guru Hanuman the "best-known guru" of Indian wrestling, who taught his skills at the Birla Mill Vyayamshala in old Delhi, a unique example of an industrial house, the Birlas, sponsoring a traditional sport.39 This tradition is now under threat at the highest levels of Indian wrestling, as India has increasingly turned to foreign coaches, mostly from the former Soviet Union, to train its wrestlers. Even though these coaches believe that the initial training of Indian wrestlers in akharas is an impediment to international success,40 it is unlikely that the akhara tradition, with its historic and deep moorings, will disappear. At the same time, however, international norms and rules and their accoutrements—wrestling mats and modern weight-training equipment—are slowly changing the world of kushti. It also is true that in many urban akharas , the gym and weight-training equipment have a stronger attraction for young Indian males who want to build their physique rather than take the arduous path of learning how to wrestle.

Boxing, which, as we saw, has a much shorter history in India, is the other ring sport in which India has excelled in recent times. Bhiwani, a dusty town in the north Indian state of Haryana, some 75 miles  from Delhi, is now the epicenter of Indian boxing. The transformation of this nondescript town into India's boxing capital had much to do with the Asian Games medalist Hawa Singh, who in the late 1980s established the Sports Authority of India (SAI) boxing center in Bhiwani. Although Hawa Singh can be credited with bringing boxing to Bhiwani, it was only after creating the Bhiwani Boxing Club—essentially a private enterprise begun by a former national coach, Jagdish Singh, but supported by the Haryana boxing association—that the sport really took off. Several of India's boxers who had been winning medals in international tournaments, including the Olympic bronze medalist and world champion Vijender Singh, got their initial training at the Bhiwani club. Despite the squabbling over whether the government-run SAI or the Bhiwani club should get the real credit, Bhiwani is, at present, home to as many as five boxing centers, including the SAI center, the Bhiwani club, and yet another academy run by Hawa Singh's son, where some one thousand boxers train.41 Not surprisingly, a large majority of India's top boxers, including Vikas Krishan and Dinesh Kumar, are from Bhiwani. The advent of boxing has changed not only Bhiwani but also the lives of the boxers, none more so than Vijender, with his matinee-idol looks. He is undoubtedly the biggest star of Indian boxing, having signed several endorsements after his Olympic medal as well as a three-year contract with a sports management company. And in what was rare for a non-cricketer, he took part in reality shows, and there was even talk of a role in a Bollywood fi lm. The high life also implicated him in a drug scandal in 2013.42

If Bhiwani is India's boxing capital, Haryana has become its sports factory. Indeed, in the 2010 Commonwealth Games, nearly half of India's medals were won by sportspersons from Haryana. There are several theories as to why this tiny north Indian state, which has only 2 percent of the country's population and a highly skewed gender ratio, is now the nursery of contact sports. One scholar offered two reasons for Haryana's success in reaping medals: The first is the volatile history of the region, which has faced invaders over the centuries and has developed a certain degree of aggressiveness; and the second is the peasant culture of the area, which values physical strength and perseverance.43 We could add the sudden prosperity of Haryana's farmers, who have profited from the boom in land prices, owing to the state's proximity to Delhi, allowing the younger generation to focus on sports with out worrying too much about making a living. What also has contributed to the sports renaissance is the state government's aggressive policy of funding sports. Medal-winning sportspersons are rewarded with substantial cash awards, and the government has reserved 3 percent of the jobs in the police for them. Consequently, many of Haryana's medal-winning sportspersons are working for the state police. An economist's take on Haryana's success is that it has built a sports infrastructure and given fiscal incentives directly to individuals instead of pouring money into sports federations and public training.44