Girish Karnad along with many other activists took part in an event organised to mark Gauri Lankesh's death anniversary. 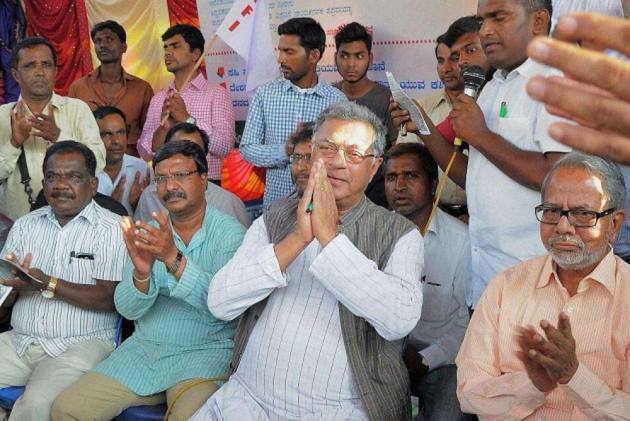 A police complaint has been lodged against playwright and Jnanpith Award  winner Girish Karnad on Friday by a lawyer for holding a placard 'Me Too Urban Naxal'.

In his complaint, advocate Amruthesh NP said Girish Karnad sported a placard around his neck declaring himself as an urban Naxal.

"Urban Naxals are those who spread insurgency against the nation," he said in his complaint and demanded that Girish Karnad be arrested immediately. By holding such a placard, "Karnad has tried to promote/abet and propagate the violent and criminal activities of Naxalism," the advocate said.

Talking to media, Amruthesh NP said how can somebody carry a banner of a banned organisation and support it.

Vidhana Soudha (state secretariat) police said they have transferred the complaint to the Halasuru gate police station under whose jurisdiction the incident took place.

Girish Karnad along with many other activists took part in an event organised outside Lankesh's residence on Wednesday.

The participants also staged a protest against the house arrest of five activists from across the country for their alleged links with Maoists.