As the year 2021 comes to an end, we take a look at some of the most fantastic weight-loss transformations of Indian celebrities. 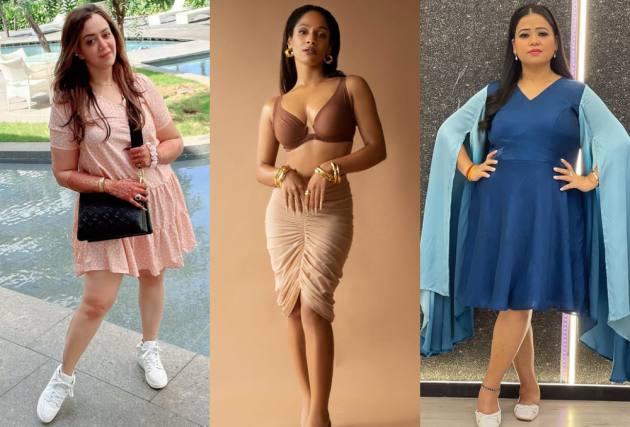 Many celebrities have had makeovers in 2021. Finding time in our hectic schedules to go to the gym and stick to a diet seems difficult, but quite a few of them have the willpower to make that effort. Many celebrities have made tremendous changes to their weight and health this year via diet, exercise, and of course, patience.

As the year comes to a close, here is a list of some such motivating and empowering celebrity weight reduction transformations for you:

Masaba, a famous fashion designer-cum-actor, discussed her battle with PCOD and the need of sticking to a strong gym regimen to address such disorders that affect one out of every three women worldwide. Despite having PCOS, she took a mirror selfie showing off her weight reduction makeover. She stated that she was the lightest she has ever been in ten years.

This time, the queen of comedy has taken everyone by surprise with her enormous weight-loss metamorphosis. Bharti Singh has lost roughly 15 kgs in weight. Her huge weight-loss makeover has taken everyone by surprise. According to reports, she has lost close to 15 kgs. Previously, the comedy queen weighed 91 kgs. She currently weighs 76 kgs. On social media, the diva emanates a thin and trim appearance. According to Zee News, Bharti confessed in one of her media appearances that she is astounded by her personal metamorphosis. Her lifestyle is improving as she is able to lose weight and maintain a healthy weight. She also went ahead to announce her pregnancy a few months later.

Sameera Reddy, an actor-blogger, has recently begun a fitness adventure. Sameera Reddy, an enthusiastic social media user, revealed on Instagram that she shed 11 kgs by being consistent. She weighed 92 kgs when she began her weight-loss journey. She is only a few kgs away from her goal weight of 75 kgs. One post at a time, Reddy has been setting fitness objectives for herself and some massive fitness goals for her admirers and fans on social media.

Smriti Irani, the actor-turned-politician, is active on social media and posts pictures of her daily activities. Smriti Irani just released a photo, and her followers can notice that she has shed an immense amount of weight. Everyone was taken aback when the Union Minister had a dramatic weight reduction metamorphosis. Manish Paul, an actor, recently shared a photo of himself with Smriti Irani in which she seemed unrecognisable to viewers. The minister, according to reports, is on a dairy-free, gluten-free, and sugar-free diet. To get back in shape, she is pursuing a stringent fitness regimen.

Aditya Narayan, an actor-singer-host, had gained weight after testing positive with Covid-19. He has reduced 13 kg as a result of his devotion and hard work. In an interview with ETimes, the singer said, “I worked out for 2-3 hours in the gym and cut down on my meals and ate in proper proportions. That’s how I got fit again. It is important to follow a strict regime and discipline when it comes to staying fit. I was not fat but needed to get fitter. Our work also involves a lot of running around and so it is important to keep fit and focussed when it comes to health.”

Khusbu Sundar, an actor-turned-politician, shed 20 kgs. Khusbu revealed her dramatic weight reduction story to all her fans and well-wishers on Twitter. She tweeted, "From there to here. 20kgs lighter, I m at my healthiest best. Look after urself,remember, health is wealth. N those who ask if I am sick, thanks for ur concern. I never been so fit ever before. If I inspire even 10 of u out here to lose weight n get fit,I know I have succeeded. (sic).” Her personal practice of yoga and planks has been a big contributor to her progress towards a healthy lifestyle.