From Ed Sheeran’s ‘Shiver’ to Coldplay and BTS’ single ‘My Universe’, here’s our list of top 10 international songs released this year. 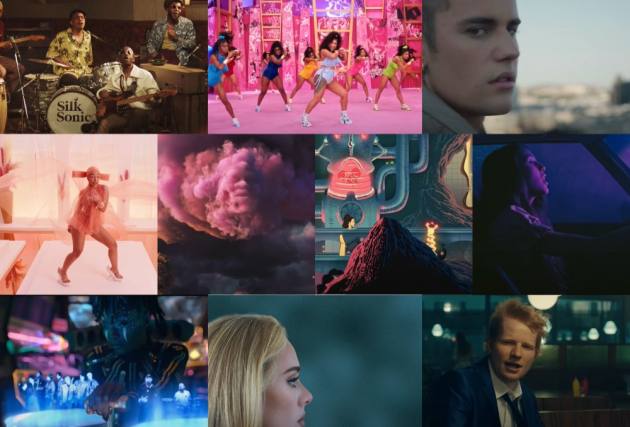 Music was one of the most consumed things on the Internet over the last one year with several musicians, releasing relentless music. While the old icons continued to strengthen their hold on the international audiences with their music, some newer artists, also managed to impress listeners with their tracks. From Olivia Rodrigo’s ‘Driver’s License’ to Lis Nas X’ ‘Monter’, here’s our list of top 10 international songs.

Save Your Tears’ (Remix) by Ariana Grandee and The Weeknd

A smooth discop-pop number,one falls in love with track immediately, or at least as soon as the verses start, and by the time the pre-chorus and the chorus comes in, one is already taken in my smooth vocal harmonics and the typical synth-pop sounds. One of the many tracks that prove these two are masters of their craft, and was one of the most popular number this year.

It is that type of a single which sort of defines Cardi B’s music over the years. Relentless bars, in the background with that sort of high hat and snare beat, which is a constant, and lyrics, well, typical Cardi B and her sort of aggression and roughness which is why she is famous for.

Another pop single, where Ed Sheeran beautifully manages to convey his emotions in the perfect manner, and the music just explains the entire mood of the song. This song, ‘Shiver’ is about the butterflies-in-your-stomach feeling, when one sees the person, they are crushing on, are madly in love with. It has got a very nervous energy, just the kind of nervous excitement that one probably cannot explain. 'Shiver' just sets the mood right, and can become a popular club anthem in time to come.

It is that kind of a song that one would love listening to when you they are alone, and are thinking about several things. The song has a brilliant sense of you know moving between highs and lows and throughout the song, there is that constant sort of movement from happy to sad and that’s what a listener goes through when listening to the song, and perhaps maybe even connect with it.

‘Montero (Call Me By Your Name)’ by Lil Nas X

If one has followed the news around the release of the song, which led to many controversies, they’d know the sort of socio-political significance of the song, and why it is so relevant in these times right now. But musically speaking, I am going to talk about the music,  it has got the sort of rnb-meets-hiphop-meets-pop vibe. One can easily just break this song into phases, and it takes you through this journey of highs and lows, and the entire song is a proper experience.

‘My Universe’ By Coldplay X BTS

What happens when two of the biggest music sensations collaborate? Well, if history has proven anything, it is that they are always successful. ‘My Universe’ a collaborative effort between British rock band Coldplay and Kpop boyband BTS is exactly that and something that put will a smile on the face of the listener. It’s got that perfect blend of Coldplay’s musical sensibiltities, in terms of the melody, and the entire song progression will remind you of a typical Coldplay song. And then the dance bits, the celeberatory bits, is what BTS brings to the table.

This song will give you the vibe like you are listening to another song by Doja: 'Say So.'  ‘Kiss Me More’, too has very similar vibe in terms of the music and the sort of the entire composition. But her voice just acts as such a contrast to that rather smooth music, and that’s why her music and her songs are pretty unique.

‘Easy On Me’ By Adele

She is back and ‘Easy On Me’ reminds everyone why she was missed along with her deeply personal music. Somehow, everyone just seems to get Adele’s pain, especially when it comes to heartbreaks. She has got a very unique way in making her very personal heartbreak story, relatable to everyone and ‘Easy On Me’ is one such example.

Another song that listeners majorly fell in love with, ‘Leave The Door Open’ has got that really smooth RnB vibe, that will keep one swaying throughout the song, and Bruno Mars’ vocals are just too good, and fit perfectly well with the music.

'Stay' by The Kid Laroi and Justin Bieber

A Proper pop song, that will just make one feel so good about themselves, and musically as well, it’s just too refreshing and it sounds like a song that no one has ever heard before. Its popularity has risen ever since its release, and has been one of the most streamed songs this year.