Krishna says “I don’t see it as a job. It is a way of upasana (worship) for me 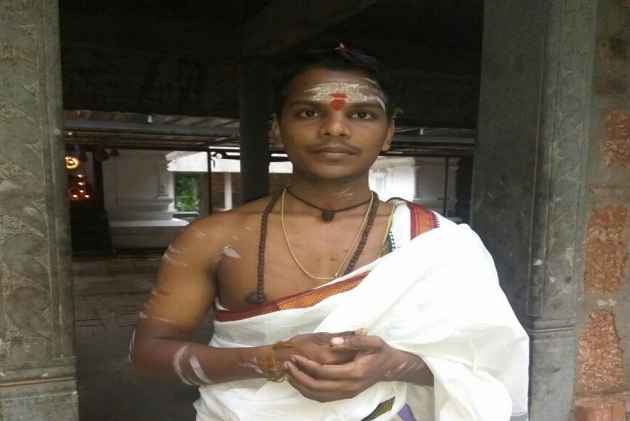 At age six, when Yedu Krishna started as a helper in a temple in his village in Thrissur district in Kerala, little did he know that one day he will create history by becoming one of the first dalit priests to be recruited by the Travancore Devaswom Board (TDB).

Breaking the caste barrier, TDB, which administers over 1000 temples in the state, has recruited six Dalits as priests for the first time in history. In another first, the appointments are being done according to the reservation norms that are followed for recruitment of government staff.

22-year-old Krishna, a disciple of Brahmasree KK Anirudhan Tantri of the Gurudeva Vaidik Tantra Vidya Peedhom in Ernakulam, has ranked fourth in the exam and interview conducted for the post of priest. Besides Krishna, there are five more dalits in the list put out by the Kerala Devaswom Recruitment Board who will now enter the fortress that was once held only by Brahmins.

The total reservation for SC/ST and OBC categories is 32%. But, as many as 36 persons from backward communities have figured in the list and some of them even made it to the merit list as well.

Krishna’s Guru Anirudhan Tantri recalls that he first met Krishna at the Nalukett Sreedharma Shasta-Bhadrakali temple in Krishna’s native village. The Tantri was serving as the acharya of the temple while Krishna, son of a daily-wage labourer, was a helper there.

“I found him as a boy of good discipline and obedience. He used to bring flowers for the puja at the temple. He was such a nice boy that if I ask him to bring two pieces of plantain leaves, he would bring at least ten pieces. I didn’t ask his caste. I asked him whether he wanted to learn shanti puja. He nodded and I took him to the Vidya Peedhom run by me,” Anirudhan Tantri told Outlook.

The Tantri, who is also a non-Brahmin belonging to the OBC Ezhava community, says that his Vidya Peedhom, which has been teaching shanti puja for over 30 years, has more than 30 students including Krishna in the current batch. They belong to all caste groups and several of his disciples have been posted in various private temples in Kerala and even in other Indian states. He sees Krishna’s appointment by the Devaswom Board as a historic step.

“Krishna was 12 years old when he came to the Vidya Peedhom. He is a Brahmin now by culture, behavior, food and everything,” Anirudhan Tantri says.

Anirudhan Tantri says that he does expect opposition from some quarters against appointment of non-Brahmins as priests in Devaswom Board’s temples. When contacted by Outlook, Krishna also said there could be opposition to his appointment.

Last month, Biju Narayanan, a priest belonging to the Dalit community was attacked in Kerala’s Palakkad district. Narayanan, a priest of the Mathrukula Dharma Raksha Ashram, was stabbed in his hand and shoulder by unidentified persons while he was resting at home. He was preparing for a ‘maha yagna’ to be attended by Dalits in December this year and had received death threats in the past through phone calls and messages on Facebook.

In June, the Devaswom Board had cancelled the appointment of a non-Brahmin priest in Chettikulangara Devi Temple in Alappuzha after opposition by the Hindu Matha Convention who said his appointment would “anger the Goddess.” The Board, however, re-appointed him as keezhshanti (junior priest) after he challenged the cancellation of his appointment at the Kerala State Human Rights Commission.

However, Anirudhan Tantri says that he is prepared to meet any challenges on way to eliminating caste in priesthood. “I believe that priesthood or Brahminhood is attained by karma and knowledge and not by birth,” he said.

When contacted by Outlook, Krishna said, “I don’t see it as a job. It is a way of upasana (worship) for me.”