Yes, Hindus And Muslims Are Fighting In West Bengal, But Only Political Parties Of The State Are to Blame

In West Bengal, which had pretensions of being one of India’s most “secular” states, disruption of the harmonious coexistence of faiths has been the exception rather than the rule. 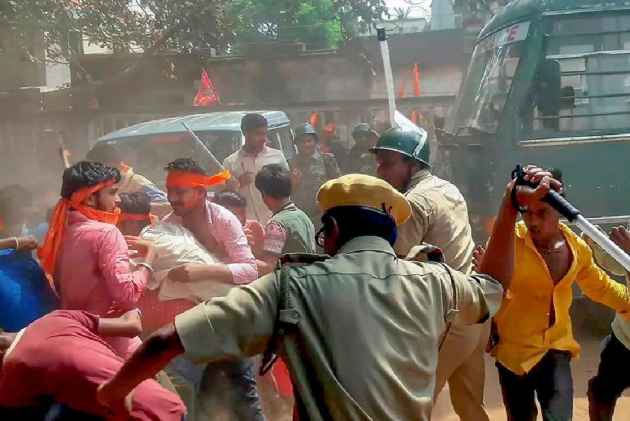 Are the Hindus and Muslims of West Bengal fighting? If the violent communal clashes which raged through parts of the state in the last three days in which three people died and many were injured including several police officers is any indication then yes they are. And if they are then only political parties of the state are to blame. They have been playing tug of war with the “religious sentiments” of the people, fanning the fire where it raged, dragging the divides out if they lurked just beneath the surface and stirring them up if they remained latent. In West Bengal, which had pretensions of being one of India’s most “secular” states, disruption of the harmonious coexistence of faiths has been the exception rather than the rule.

But the recent spate of violence, including the latest which gripped Purulia District on the day of Ram Navami and spread to Durgapur and Asansol in the following days, is indication that that has changed. The two main political parties in the state, ruling Trinamool and rivals, BJP, had been outdoing each other trying to lead the most ostentatious parades in the name of Lord Rama. Hundreds of processions – by some counts, close to five to eight thousand people in some of the larger ones – marched through the streets in various parts of the state.

According to police, which claimed to have denied permission to the processions to carry any sort of “weapons” even if they represented religious symbols, several of the processions, including one passing through Purulia District, deliberately flouted the rule and even children were witnessed brandishing swords, tridents and even guns and pistols. The police further claimed that one particular procession decided to deviate from its original route and insisting on passing through what was referred to as a “sensitive” area, dominated by “minority” communities.

There were altercations between local district officials who tried to stop them but the rallyists reportedly flouted the orders and marched on.  Trouble started when the procession reached Bhursa, a village which was part of the detour, from Haramara. According to eyewitness accounts vehicles, including cars and motorbikes, parked along the road and supposedly belonging to some of the members of the procession, who were following the walkers, were set on fire by enraged locals who felt they were being baited. People from the procession allegedly launched a counter attack going on a rampage, hitting the attackers with sticks and stones. Bombs were hurled and people ran helter-skelter.

The fifty-five year old man who died, allegedly killed by attackers who pounced on him and beat him with sticks, was reportedly neither a part of the procession nor amongst the gangs who set the vehicles ablaze or threw the bombs. By some accounts he was just a farmer who had gone to take a dip in the pond.

He was taken to the hospital, bleeding and unconscious and was declared dead. Many of the injured were admitted to various hospital and are still being treated – for scrapes and cuts if they are lucky but also for severe bleeding, shrapnel and splinter laceration or head and spine injuries.

The incident has sparked other communal clashes with bordering Burdwan District flaring up over the past days.

As usual, political parties have begun the blame game. A Trinamool source said, “Before the BJP was trying to enter West Bengal, since they came to power in the Center in 2014, such incidents were unheard of. There is a pattern to it. The religious processions before every election – the Panchayat elections this year and the Parliamentary elections next year – are meant to ignite Hindu religious feelings.”

The idea is that in a state where the BJP is finding it difficult to consolidate the nearly 33 percent Muslim vote it is trying to go for the Hindu vote. However, as political scientist Professor Biswanath Chakraborty observers, “In West Bengal, the Hindu vote is not untied because in this state the Hindus don’t vote on religious lines but on issues and even ideology. So the attempt by BJP to gain the Hindu vote by introducing religiosity is unlikely to ensure a Hindu votebank. All it can do perhaps increase the voteshare but that too marginally.”

Professor Chakrabory, also a psephologis, points out that one of the main reasons for the “secular” voting patterns of this state is subsequent rules by “secular, democratic” political parties, including Congress but namely the three and a half decade Communist rule followed by the Trinamool.

“In Bengal, religious sentiments have been relegated to the privacy of individual homes and or respective places of worship. It is now being brought out into the streets as a political issue,” says the Trinamool source. “The BJP and their allies are introducing the ‘divide-and-rule’ policy in the state.”

Yet the BJP is quick to retort that “if anybody has practiced ‘divide and rule’ policies in West Bengal it is the Trinamool,” Dilip Ghosh, state BJP President, told Outlook. “When the Durga Puja immersion procession clashed with the Muharram, the chief minister announced that no Durga Puja procession would be allowed on that day. It is well known that she has been trying to appease the minority community with such gimmicks and by donning hijabs and doing namaaz so that she can win their votes. She has been paying 2500 rupees stipend only to the Imams but what about the leaders of other religious communities? Why nothing for them? But now that the BJP has taken up the cause of the Hindus who have been neglected in the state, they are trying to jump into the bandwagon also.” He taunted the Trinamool for taking out processions on Ram Navami by saying, “Well, at least the significance of Ram Navami has now dawned on them. Better late than never.”

In the meantime the VHP leader of the unit which had allegedly taken out the parade in Purulia District has denied that weaponry was carried but nevertheless has told reporters that since there have been accusations, the matter would be looked into.

Babul Supriyo. Asansol Member of Parliament, one of the BJP’s two MPs from the state has visited the riot-hit areas, which is presently under curfew with Section 144 of the Indian Penal Code imposed, forbidding the gathering of more than  four people. Speaking to Outlook he has expressed concern over the administration’s “lack of control over law and order.”

However, in the midst of allegations that the police arrived nearly two hours late to the trouble-torn areas, the police and administration hit back saying that the number of police personnel injured – more than seven at last count – is proof of their presence.  They further alleged that “the trouble makers were brought in from outside.” This was a common refrain even in such areas as Baduria.

Whatever the case maybe, some analysts feel that there is no denying that an atmosphere of religiousness is brewing in the state. “If not religious animosity but at least religious self-consciousness,“ explains Tarun Ganguly, Bengal political expert. “Not everyone can see through the political designs here.  And there are bound to be some religious response evoked in each community. These are carefully manipulated political moves and the degree of success depends upon many factors.”

In this case, how far the people of Bengal will resist such moves.