'Yes, We Want To Unseat The Congress In Every State'

The BJP general secretary on Congress-mukth bharat and the jungle raj in Bihar and Gujarat. 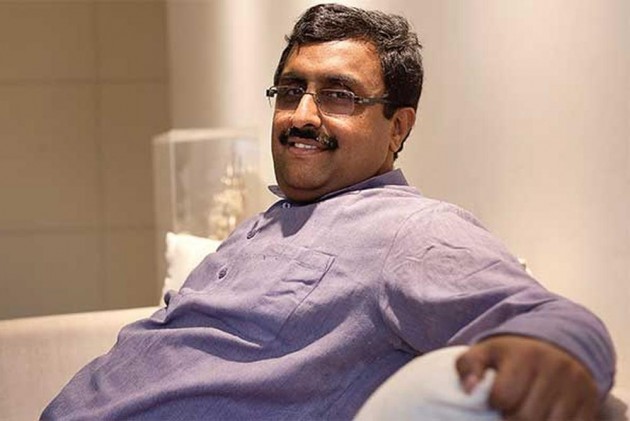 The call for a Congress-mukt Bharat, claims BJP general secretary Ram Madhav, is not directed against the political party or the Gandhi family. It's a call against the Congress ‘culture' of corruption, nepotism ‘and all that', he says in this final part of an interview with Prarthna Gahilote. But he lashes out at Nitish Kumar and his ‘Jungle Raj'. Excerpts:

Why is Nehru being wiped out of text books? Was he anti-national?

Again I am saying it is all complete propaganda. Nobody is wiping out anyone. I mean for decades on, forget about others, people like Subash Bose were wiped out of text books. No mention, nothing. No mention of tons of great leaders of this country. No mention of Sardar Patel. Nobody raised questions. Today, somewhere in one text book, for some reason, I don't know what is that reason, they are surely going to address it, you don't mention about one leader, first Prime Minister of India, as though his name is being wiped out everywhere. Right in Delhi, if we were to wipe out his name we should wipe it from Nehru Memorial. But we are not doing that. Who is wiping out? Who can wipe out history?

You wouldn't go as far as calling Nehru anti-national, as some others do?

Why should I call anybody anti-national? I mean, these kind of statements are not correct coming from anybody. Just as nobody should call anybody communal, just because I am from RSS, I am communal, it is wrong way of putting things. Similarly you can't go on labelling people, this way, that way and all that. I may not agree with his policies but it is kind of a post-mortem. You were not existing then. Those who existed at that time, they fought against those policies. That was the time and there were number of people who were fighting against the policies of Nehru. That is for us to understand that okay certain policies are opposed. But today I can't go and judge people who lived and worked fifty years ago.

The popular slogan of 2014 was Congress Mukt Bharat, is there going to be a Nehru-Gandhi Mukt Bharat also?

Congress Mukt Bharat is about a particular way of running politics in this country. It is not about any individuals or any party alone. Yes. We are a political party and we want to win every state. That means we want to unseat the Congress party in every state so in that sense we give a political slogan. But at another level you want to give this country a different kind of politics, which is non-corrupt, which is clean, which is development-centric, which has no place for what you call as family raj, nepotism and all that.

You have certain surname so you are entitled to become everything. That kind of politics has to go. And politics of merit in politics, we have to go for that. It is a different kind of politics when we say Congress Mukt Bharat, a particular culture has to go from this country. A culture of accountability, culture of responsible governance, this has to be brought in. And Prime Minister Modi represents that kind of politics. And a different kind of politics. In that sense you have to take it that it is a Congress Mukt Bharat, we want. As a party yes, the Congress will remain. It will lose states, it may win a few states here and there, our fight will continue, as a party…yes, we want that in every state we should be the ruling party. We are in politics to win elections.

But does that extend to a Nehru-Gandhi Mukt Bharat also?

As I said, our fight is essentially political, not personal… you must remember it is a political fight. As I said, at the political cultural level we want a different culture. We don't want the Nehru Gandhi culture. What is this Nehru-Gandhi raj? Did we ever say Atal-Advani raj ? Why say Nehru-Gandhi culture? That is precisely what we have to come out of. Just to bring different politics. Politics of development, politics of values, politics of morals, politics that is clean and at another level, yes, in political electoral battles we want to defeat Congress everywhere for that matter all the political parties that are opposed to us, we want to defeat all of them.

Where do we see the Augusta probe going? Will it land up at the doors of the Gandhis?

Definitely, definitely! The Defence minister has said that nobody will be spared. Which family it is, is not the question. First family or last family, that is what he said. I am sure the investigations will lead to those who are responsible for swindling money in those kickbacks. They will be brought to book.

How do you react to Nitish Kumar's call for an RSS Mukt Bharat?

Nitish Kumar for political reasons today, can say anything. It is a purely political statement. Today he is in bed with Congress. So because we are saying, we are echoing the sentiment of the nation, of a Congress Mukt Bharat, he wanted an alternative political slogan to please his bed fellows. Otherwise he was okay hobnobbing with RSS people until two years ago. He was in the government of the so called RSS people, in Delhi, in Patna, for years on. That time RSS was okay. Suddenly you change your partners and you think you have to find, invent a new slogan.

But you did lose to Nitish Kumar in Bihar. And that has been a setback?

No set back. He decided to part ways with us. It was not we. Fair enough. In politics you decide about your own future.

But the election following that, BJP could not form government..

That is fine. Look at his plight.

But Bihar was a setback to the BJP…

Definitely Bihar was a setback and nobody denies that but look at him, he was running a stable government in a dignified manner. We always accorded him respect that was due. But look at his fate today. The state, the jungle raj has returned to haunt the people of his state today. And in his state nobody respects him today. His own partners don't respect him. His own deputy chief minister does not agree with him on many issues. Whereas we were running such a stable government. (It was) such a beautiful relationship. It was his own decision to call off this relationship which was for the benefit of the state. But because he had such big ambitions and he decided to leave a stable, well-meaning party. He was ready to go with people who were responsible for the ruin of the state. He brought them back today. See the plight. College students are not safe. Journalists are not safe. Nobody is safe in the state, courtesy Mr Nitish Kumar. And thank god in three months people found out what Nitish Kumar is all about, what he is made of. At least when we were there we were helping him run the government responsibly.

Criticism of terming Bihar as jungle raj is countered with how about Gujarat? And 2002 riots there?

Hundred times better than Bihar today. I am not blaming Biharis. I am blaming Nitish Kumar's partners. They are responsible for bringing back jungle raj. There was no jungle raj in Bihar two years ago when we were his partners. Together we were running the state responsibly. And no comparison with Gujarat. There's no comparison.

When you say jungle raj in Bihar, they talk about Gujarat riots of 2002…

So does that mean that that ‘okay I have jungle raj but you also had jungle raj'? Is that what he is saying? Let him say that I am also running a jungle raj. Is he saying that? Then we can talk about other things. MLCs involved in murder and for 48 hours you can't catch your own MLC. Your own party MLC. That is the state of affairs. Whereas in Gujarat, in all those cases thousands have been arrested. Thousands of cases have already been solved by the courts. In this state somebody sitting in the jail orders for the murder of a journalist and he is killed and nobody is caught. That man is sitting happily inside the jail and your MLC protects killers and that MLC you can't catch for 48 hours. This is the kind of government he is running. It is not about the people. People are good, in Bihar, in Gujarat, everywhere. You have to do justice as a government. That is where the question of jungle raj comes in.

This is the concluding part of the Ram Madhav interview. Here's where you can find part one and part two