Yet Another Black Saturday

Terror returned to haunt Delhi exactly two weeks after the serial blasts of Saturday, September the 13th, when news of an explosion in the crowded Mehrauli market, near historic Qutub Minar, set the city on edge. Terror returned to haunt Delhi exactly two weeks after the serial blasts of Saturday, September the 13th, when news of an explosion in the crowded Mehrauli market, near historic Qutub Minar, set the city on edge.

According to eyewitness accounts, two men on a motorcycle dropped a black polythene bag opposite an electronic shop around 2:15 PM in the crowded market street in Ward No 8 of Mehrauli that is popularly known as the Sarai, barely 10 metres from the Jahaj Mahal where the annual "phoolwalon ki sair" procession, equally beloved to both Hindus and Muslims, culminates.

It is not clear whether the bag accidentally fell down or was purposely dropped by the pillion rider. But this much is clear that a 13-year-old boy, Santosh Kumar, picked it up to give it back to the bikers.

They refused, but Santosh was still keen on handing it to them when the packet exploded, killing him instantaneously and injuring 18 others. The last words heard by eyewitnesses and his relations were Kumar saying, "bhai saab, aapka packet gir gaya hai (brother, your packet has fallen)"

"Everything happened so suddenly. Thick smoke came out instantly and there was a bang. My nephew was in blood," recounts Santosh's maternal uncle Fantoosh, who has a small stall selling omelets and boiled eggs nearby. Santosh was out on an errand for him to get a crate of eggs.

The bikers, estimated to be around 30-32 years old, fled off on their Black Bajaj Pulsar with Delhi registration number. They were both wearing helmets and wearing black jeans and black T-shirts.

Three persons, including a couple, saw the entire episode and are being questioned.

The blast was so strong that it shattered the window panes of many of the houses nearby and formed a small 4 to 5 inch deep crater formed at the site of the blast. There were as many 23 who received serious injuries, and the doctors fear for at least three of the critically injured.

Police Delays & Lapses
Local residents were very upset at the lax security in the area and that the police took so long to respond -- apparently, various calls on telephone number 100 did not elicit a prompt response with the person at the other end repeatedly asking where Ward No 8 in Mehrauli was.

"There was a huge sound. I came out of my shop and saw some people were injured and screaming for help," a shopkeeper said. "Police were nowhere to be seen till one hour after the incident. We took the injured to the hospital," another shopkeeper, who was injured in the incident, added.

Because the police responded so late, there was clearly a delay in sounding an alert for the bikers, and there has not been any lead so far; considering that Mehrauli is located on the border with Haryana, chances of their having crossed the border cannot be ruled out. 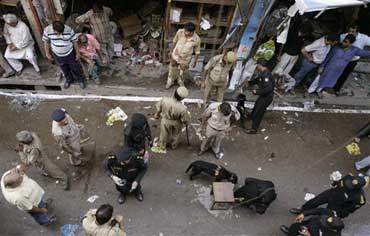 Not only that, many residents pointed out that even when Delhi Police personnel finally arrived, they in all likelihood ended up destroying forensic evidence that could have helped in gathering information about the blast.

Even before the bomb experts from central security agencies and National Security Guards could arrive on the spot, police personnel had removed the debris and washed the blood stains from the blast site. Senior police officials oversaw the work as residents cleaned the site with a bathroom mop and some cardboards.

When asked whether such action would destroy crucial evidence even before the experts from NSG arrives, an official said, "We have already collected whatever was there. Moreover, even when we have cleaned the place, we have made sure that all materials are collected in the gunny bag."

Some residents came forward to show double edged nails which they claimed were collected from the blast site. It was only later when the NSG team arrived, that the area was cordoned off and residents and media persons were asked to move away. 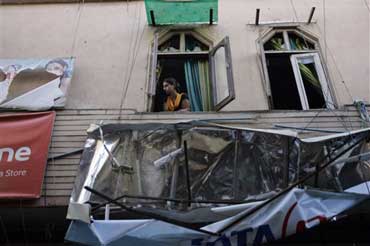 Low-Intensity Explosion
Intelligence sources say loosely packed Ammonium Nitrate with one-and-a-half inch nails, which acted as shrapnel leading to injuries, was used in the blast, and Sulphur that causes dark smoke, was used in the explosion. Potassium was used as the triggering mechanism, as it burns due to friction and contact with air. The packing of explosive was very loose thus making it a low-intensity explosion.

Ammonium Nitrate was also used in the five serial blasts that shook Delhi on September 13, leaving 24 people dead and many others injured. The chemical was also believed to have been used in recent series of explosions in Bangalore, Ahmedabad and in many earlier blasts including the serial train blasts in Mumbai, Malegaon and Hyderabad. But this blast was different in the sense that it did not use any triggering device.

In order to restrict sale of Ammonium Nitrate, used extensively by terror groups to strike in various parts of the country, the government had "in-principle" approved for amendment of the Explosives Substances Act at a special cabinet meeting chaired by Prime Minister Manmohan Singh last week. Security agencies have long been pressing for bringing a strong controlling regime to check misuse of the chemical especially in Naxal-affected states.

Sinister Saturday
There is something about Saturdays and bomb blasts. The blasts of October 29, 2005 and the recent serial blasts of September 13 were both on Saturdays. While over 60 people were killed on the eve of Diwali three years ago, 24 people lost their lives in the serial blasts this month. One person was killed and 18 persons were injured in today's blast. The serial blasts in Ahmedabad also occurred on yet another Saturday this year -- it was July 26. About 45 people were killed in the Ahmedabad blasts. Thankfully, the blast this time was of low intensity. It was also timed earlier in the afternoon unlike the other blasts which were aimed at catching the peak evening rush.