Although the prime accused -- Bajrang Dal's district coordinator -- is still at large, the police have arrested four others named by Yogesh Raj in an FIR alleging cow slaughter. 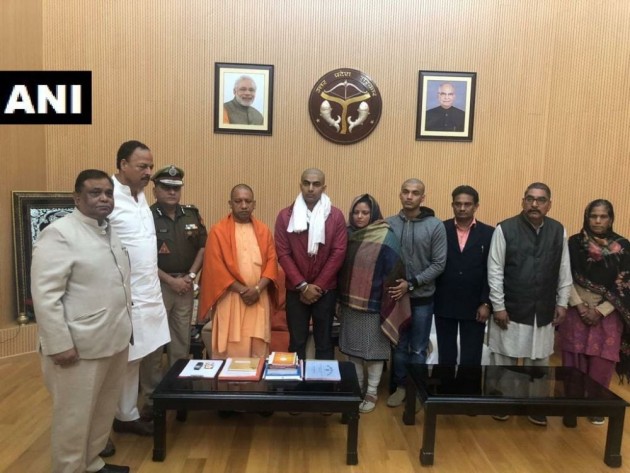 The widow of the police officer, Sunita along with her two sons Shreya and Abhishek met Adityanath at his residence.

Shrey Pratap Singh, son of Police inspector Subodh Singh: We met the Chief Minister and he has assured us that we will get justice #BulandshahrViolence pic.twitter.com/ezL2MBqTAy

Adityanath assured the family that the his government is taking necessary steps, an official told media.

Bulandshahr Cop's Killing: I Lost My Brother Because Of 'Police Conspiracy', Says Sister

Youth Killed In Bulandshahr Violence Could Be Part Of Stone Pelters

In Monday's violence that the inspector was killed along with another civilian.

Although the prime accused -- Bajrang Dal's district coordinator -- is still at large, the police have arrested four others named by Yogesh Raj in an FIR alleging cow slaughter.

Sarfuddin, Shajid, Asif and Nanhe -- who were among the seven accused named for cow slaughter in the First Information Report (FIR), have been arrested, the police said.

The police also had reportedly picked up two minors but were forced to release them after villagers stormed the police station.

There has already been two high-level meetings on the Bulandshahr incident with Chief Minister Yogi Adityanath. However, there was "no clarity on the line of action" with regards to the arrests of men belonging to the VHP, Bajrang Dal and BJP -- named in another FIR, informed sources said.

Two press notes released by the Chief Minister's Office showed no mention of the lawlessness perpetrated by the Bajrang Dal and their ilk, but speak in detail about how strict action should be taken against people involved in slaughter of cows or running illegal abbatoirs, despite a ban announced on March 17, 2017, days after the Bharatiya Janata Party government was sworn in.

"It is now proved beyond doubt that the police is deliberately not taking any action against the Bajrang Dal leader as they have connections with the BJP" Vaibhav Maheshwari, the state spokesman of the Aam Aadmi Party (AAP) told media.