Since 2014, December 25 has been celebrated as 'Good Governance Day' in memory of Vajpayee, who served as the country’s PM thrice, including a full term in 1999-2004. 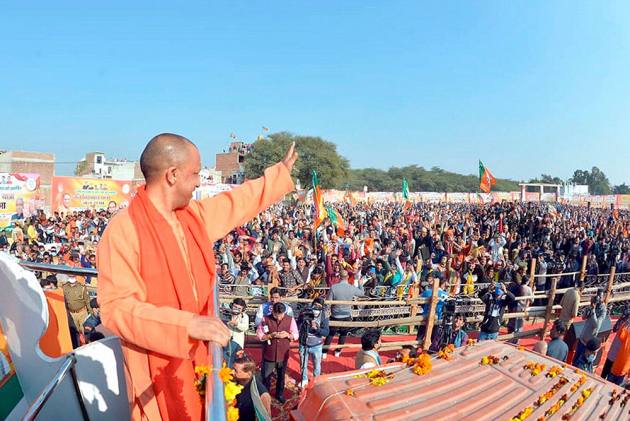 Tablets and smartphones were distributed to 60,000 students at the Ekana Stadium. Five students namely,  Akanksha Mishra, a final year student of BSc Nursing, Sagar Upamanyu, a visually-challenged student of MA (Political Science), Mehul Gupta, a BTech student, Prabal Awasthi preparing for competitive examinations and Zeba Kausar, a final year student of BA - were invited on stage to speak where they expressed gratitude to the CM for providing resources to the needy students.

Speaking on the occasion, Adityanath said youths should not be hopeless in their lives and urged them to think big. "Thinking should never be small. If thinking is big it will give a new dimension to your personality. Youths should never allow hopelessness to enter their lives, if they work with this passion, they will be able to do anything," Aditynath said.

The CM named Chhatrapati Shivaji, Maharana Pratap, Rani Laxmibai of Jhansi as people who sent a strong message to the world while they were still young.

Union Minister for Education, Skill Development and Entrepreneurship Dharmendra Pradhan was also present on the occasion.

Without taking names, Yogi accused the Samajwadi Party president Akhilesh Yadav of misleading people during the pandemic and encouraging nepotism under his rule. "Those who wake up at 12 o'clock are not youths, those who opposed the vaccine during corona pandemic and misled people are not youths, they are all tired and retired, don't trust them," he said.

"Before 2017 there was nepotism in appointments, if a job was announced, people of one family, of one lineage, uncle, nephew, maternal uncle all used to go out for extortion," he said.

Adityanath claimed to have created 4.5 lakh jobs in the state in the five years of his rule and cracked down on ‘mafia’ to the shock of their "patrons". He also made the students raise the slogan "Soch Imandar, Kaam Dumdaar" said.

Paying his tributes to Vajpayee and founder of Banaras Hindu University Pandit Madan Mohan Malviya, who share birthday, Yogi said students of UP have attained a new identity in the country and the world.

The CM honoured weightlifter Mira Bai Chanu, who won a silver medal in the 2020 Tokyo Olympics, with a reward of Rs 1.5 crore and her coach Vijay Kumar Sharma with Rs 10 lakh.

Addressing the gathering earlier, Pradhan said the students of the country realised the importance of smart phones and digital education during the corona pandemic.

Citing a report, he said due to poverty and lack of internet connectivity, only 50 per cent of the youth of the country were able to connect with digital education during the pandemic. He said in coming few months, all UP villages will be connected with internet.