'You Have All Skills': DMK Backs MK Stalin For Top Post Amid Succession War 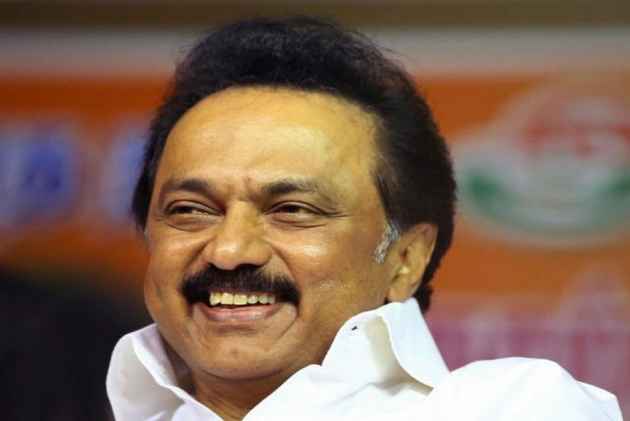 Amid indications of a possible succession war within the party, the DMK on Tuesday rallied behind its working president MK Stalin, the son of late party chief M Karunanidhi, saying he would take over its leadership soon.

He was speaking at an "urgent" meeting of the party's executive committee in Chennai to mourn the death of Karunanidhi, Duraimurugan.

"Dear Thalapathi (commander), who is soon going to become (DMK) president, we are prepared to follow your orders... lead us," the senior leader said addressing Stalin as the DMK workers cheered.

Stalin is fondly addressed as "Thalapathi" in the party and is expected to take over the DMK's reins after his father Karunanidhi's death on August 7.

"You have all the skills..you have the skills of Anna (DMK founder CN Annadurai), Kalaignar (Karunanidhi) and yourself. There is nobody in Tamil Nadu who can defeat you," he said.

Duraimurugan's statement comes amid indications of a possible succession war in the Dravidian party, with expelled DMK leader and Karunanidhi's son M K Alagiri claiming that the true supporters of his father were with him.

Signalling resumption of the family feud over Karunanidhi's legacy days after his death, Alagiri, estranged from the family, had yesterday claimed all loyal party workers were with him and that the DMK would "dig its own grave" if it does not take him back.

The Karunanidhi family had presented a united face when the leader was fighting for his life at a city hospital. Alagiri was present at the hospital and was also seen at his father's funeral.

Praising Stalin, Duraimurugan said he had traits like "concern, skills and hardwork."

"Crores of party workers are with the working president in his efforts to steer it," he said.

Though Stalin sits firmly in the saddle and his ascension as DMK president seems to be only a matter of time, Alagiri's tough posturing may prod his supporters in Madurai and adjoining districts to come out openly against the new chief.

If that happens, the DMK, which has lost two successive assembly polls and failed to open its account in the Lok Sabha polls in 2014, may encounter fresh electoral reverses in the elections next year.

Meanwhile, DMK deputy general secretary Subbulakshmi Jagadeesan accused the BJP of trying to "divide the party" and stressed on unity in the party for its well-being.

Seema Guha / Taliban government's revised version of women’s rights decree largely emphasizes on marriage and re-marriage which predictably is in accordance with the sharia laws currently prevalent in Afghanistan.