Advertisement
Home Business
For The Record

'You, Mr Finance Minister, Are The Biggest Obstacle'

The eminent lawyer writes another open letter to the finance minister: 'I want to show to the nation that you are determined to see that Prime Minister Modi can never fulfil his pledge to the unfortunate people of India to get back the black money' 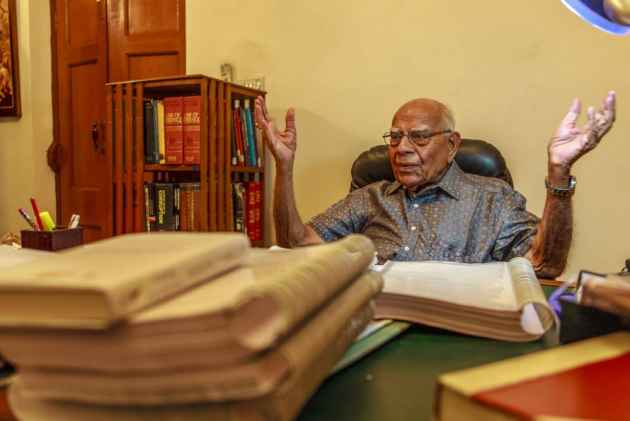 An Open Letter To The Hon’ble Minister of Finance

I am not using your name because I am concerned only with your acts and omissions as Finance Minister in the Modi government and earlier as Leader of Opposition. The contents of this letter are meant primarily for the Chairman and the Vice-Chairman of the SIT and only secondarily for the education and enlightenment of your Ministry and the people of India in general.

India being a democracy, transparency of governmental operations is a fundamental obligation. Secrecy, and what you call confidentiality, have become very attractive to your ministry and they need to be put in proper prospective. Usually the two are associated with criminal activity, though I am conscious of some exceptional situations in which there may be a moral and legal compulsion.

I must confess that I have carefully watched your conduct as Leader of Opposition in the Rajya Sabha. Never once did you raise the issue of black money stashed abroad by persons who are no better than dacoits, and the enormous mindboggling volume of the loot. If I am wrong in this view of mine, kindly do enlighten the nation as to what you have done after you became the Leader of Opposition in the upper house in the matter of recovery of black money.

Now I want you to answer the following questions as honestly as you can.

(1) Are you aware that the German government in February 2008 made a public statement in newspapers circulating throughout the world that it will provide tax authorities in other countries, details of relevant clients from the DVD obtained by them from an ex employee of the bank on payment of roughly 475 million US dollars. The DVD contained names of 1400 clients of the Liechtenstein Bank. The German finance ministry spokesman Thorsten Albig said they will willingly share this information at no cost and condition to any requesting country. How did you react to this offer? Did you raise this issue in Parliament?

(2) Did you advise the BJP to do something about this grand offer which certainly made me excited and must have likewise brought some hope in the life of the forsaken and forlorn, who could well be the victims of the loot? Did you advise the party immediately to dispatch some emissary to Germany and secure this information?

(3) Did you come to know—if yes, when?—that the prestigious Swiss magazine called the Swiss Illustrierte had announced in 1991 the names, the photographs, the account numbers and the concealed loot in their accounts of 14 international crooks amongst whom the late, then recently killed, Prime Minister of India was one? Did you as an educated Indian citizen react to this news and if so, how?

(4) During the last election campaign for Parliament when our Prime Minister went around the country and spoke about repatriation of this black money, did you speak about it anywhere or write about it anywhere? Do tell me what and where?

(5) Do you know that in March, 2014 in the midst of the campaign I personally went to Germany and on my return recorded my discussions with the highest in the German ministry and the promise which I received from them about sharing this information with us. This letter was sent to your party leaders and I wanted some little help. Was that help of signing a letter of request to the Germans complied with? Did you do anything about it yourself? Have you done anything about it after you have become minister of finance?

(6) Is it correct that even before the election results were announced you had managed to secure an assurance from the party leaders that you would be made the minister of finance? Is it true that the party leaders carried out the pre-election promise by putting you in this ministry?

(7) When you were ultimately sworn in as India’s minister of finance, did you even once seek my cooperation and some education in techniques of recovery?

(8) Is it true that in the sitting of the Rajya Sabha of 8th July, 2014, you answered a question of a Member of Parliament relating to black money? Do you confirm the question asked and the reply that you gave which is reproduced here to refresh your memory.

Will the Minister of Finance be pleased to state:

(a) whether Government has made any request regarding black money held by Indian nationals in Swiss bank;

(b) when the request was sent and what was the information sought;

(c) whether it is a fact that parliament of Swiss Government has passed a law called, ‘The Swiss tax Administrative Assistance Act’;

(e) whether the changes to be brought in under the law have to be approved through a referendum; and

(f) the details of response given by the Swiss Government in this regard, so far?”

Finance Ministry’s Answer to this question

(b) and (f) : After the amendments to the Double Taxation Avoidance Convention (DTAC) with Switzerland came into force on 7th October, 2011, several requests seeking information in respect of Indian Nationals holding bank accounts in Swiss Banks in specific cases have been made. There has been a positive response to some requests, where information has been provided subject to the confidentiality clause in the said DTAC. In other cases, the Swiss Government has not been providing the information requested citing restrictions imposed by their domestic laws. Recently, reports appearing in the media on 22nd and 23rd June, 2014 indicated that during an ongoing exercise to identify the real beneficiaries or owners of funds held in various banks operating in Switzerland, the names of some Indian individuals and entities had been identified by the Swiss Government, who may have held untaxed money in Swiss banks through structures like trusts, domiciliary companies and other legal entities based out of countries other than India. A letter was accordingly written to Swiss Authorities on 23rd June, 2014 under the provisions of Article 26 of the DTAC between India and Switzerland, requesting them to provide the information in this regard that has been complied by Switzerland. The Swiss authorities in their reply dated 4th July, 2014 have stated that there is no list of Indian Tax residents holding assets in Swiss financial institutions in their own names or through structures.

(c), (d) and (e) : As per the information available on the website of the Federal authorities of the Swiss Federation (http://www.admin.ch), the Tax Administrative Assistance Act (TAAA) passed by the Swiss parliament came into force on 1st February, 2013. The Swiss Parliament approved the revision of the TAAA on 21st March, 2014. As per the information available on the said website, any proposed enactment, which includes changes in the existing law, may be subject to referendum in Switzerland. The referendum deadline will expire on 10th July, 2014 and if no referendum is called for by that date, the amended TAAA will come into force on 1st August, 2014.”

(9) Is it true that so far as your ministry is concerned you never invoked the provisions of the United Nations Convention Against Corruption (UNCAC) for securing this information from any country of the world. In no correspondence with any country have you invoked this document?

(10) Is this because your Ministry was not aware of this document as well as its ratification by Germany, Switzerland and India or knowing about this document you made no use of it? Have you or officers in the ministry read this document till today? Do tell the nation when you read it for the first time.

(11) Are you aware of the ‘Second report of the Task Force of the BJP on the steps to be taken by India’ in the matter of Indian Black Money Abroad in Secret Banks and Tax Havens running into 95 pages. I am sure this must have been read by you. Did you read “XIII. The Double Taxation Treaty with Switzerland” at page 26 of this document which described the Double Taxation treaty as an impotent instrument. Of course when this report was written in January 2011, the ratification of UNCAC by India had not taken place, though many other countries had ratified it long before. Did you read at the foot of page 23 -24 the warning of Admiral (retd.) R.H Tahiliani, the head of Transparency International India chapter?

(12) Do you know that before you took office, India did ratify this when the Manmohan Singh government was still in power. Yet you did not use it at all. You continued to use the DTAA because it was the favourite device of the previous government.

(13) Are you aware that Finance Minister Pranab Mukherjee, our President now had recommended the use of this useless document in his otherwise useless white paper on Black money. Ofcourse you would not know that his white paper was itself called a Black Paper.

For lack of space I am stopping this and it will be continued in the next issue of the Sunday Guardian. By now you must have discovered that I want to show to the nation that you are determined to see that Prime Minister Modi can never fulfil his pledge to the unfortunate people of India to get back the black money.

You, Mr Finance Minister, are the biggest obstacle.

Also Read: Mr Jethmalani's earlier letter to the FM: 'You Are Out To Help The Biggest Criminals To Escape'