A knock spanning eleven and half hours, studded with 32 fours and a six in a 504-ball essay, the deputy is an epitome of class and patience as he becomes the first Pakistani to crack a double ton on Indian soil. His 267 is instrumental in setting up An epic double century by Younis Khan set up a massive Pakistan total and gave the visitors a chance to have a go at India in the third and final Test at the Chinnaswamy Stadium today.

The vice-captain's enduring knock of 267 spanning eleven and half hours ensured Pakistan overcame an early bump and a minor middle order collapse to post a daunting 570 before being all out half an hour before close.

Younis became the first batsman from the neighbouring country to score a double century on Indian soil and almost carried the bat for the second full day, striking 32 fours and a six in a 504-ball essay.

If the Indians were able to hold their heads high and not allow their shoulders to droop, it was very much due to the heroic effort of Harbhajan Singh who ended up with his 16th five-wicket haul of six for 152.

The off-spinner, under the ICC scanner after being reported for suspect action during the second Test, put the brakes on Pakistan's smooth roll by picking three wickets in the second session before scalping the prized wicket of Younis to hasten the end.

At stumps on the second day, India were 55 for no loss with Virender Sehwag batting on 39 and Gautam Gambhir on 13.

Pakistan lost their captain Inzamam-ul Haq before he added a run to his overnight score of 184 in the very first ball he faced this morning.

They were then reduced to 446 for six after losing Yousuf Youhana (37) and Asim Kamal (4) in quick succession. But Younis steered them out of the rough with three crucial partnerships.

After stitching 84 runs with Youhana for the fourth wicket, the 29-year-old batsman added 58 and 61 runs with Kamran Akmal (28) and Mohammad Sami (17) for the seventh and eight wickets respectively.

Younis remained the fulcrum of Pakistan innings after the early dismissal of Inzamam.

He crossed the 200 mark, glancing Anil Kumble for a boundary down the fine leg and followed it up with another four in the same over.

A jubilant Younis acknowledged the crowd's ovation by lifting his bat and helmet and then kissed the ground. By then, he had hit 24 fours and a six facing 396 balls.

He needed 20 balls to move up from 196 but once he completed the double century, he came up with a couple of exquisite boundaries.

Younis' previous best was 153 against the West Indies in Sharjah in 2001-02. One of the few to retain his place in the team after Pakistan's World Cup campaign in 2003, he had scored a century in the second Test at Kolkata.

The right hander finally perished when he went for a big heave against Harbhajan and holed out to Irfan Pathan at mid off. 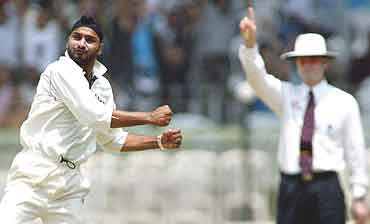 The hosts had their hero in Harbhajan. Shrugging off the 'doosra' controversy, Harbhajan picked up three wickets in quick succession before and after lunch to put the brakes on Pakistan's march towards a huge total.

Harbhajan struck twice early in the post lunch session to dismiss Asim Kamal (4) and Abdul Razzaq (5). In the fifth over before the break, he had sent back Youhana (37).

Earlier, Inzamam failed to score a double century as India stuck early on the second day.

The skipper, who had accomplished a rare feat by scoring a century in his 100th Test, was trapped leg before by Lakshmipathy Balaji in his very first ball of the day.

It was a sort of a repeat performance by the Chennai bowler who had removed Shahid Afridi in his very first ball yesterday.

Inzamam, who was looking to build on his innings and take his team to a huge total, was applauded for his brilliant innings but he clearly walked back a disappointed man.

Inzamam's third wicket partnership with his deputy yielded a record 324 runs which came in 368 minutes, 533 balls.