The finest and most successful left-arm pace bowler in the history of Indian cricket? retires?.? 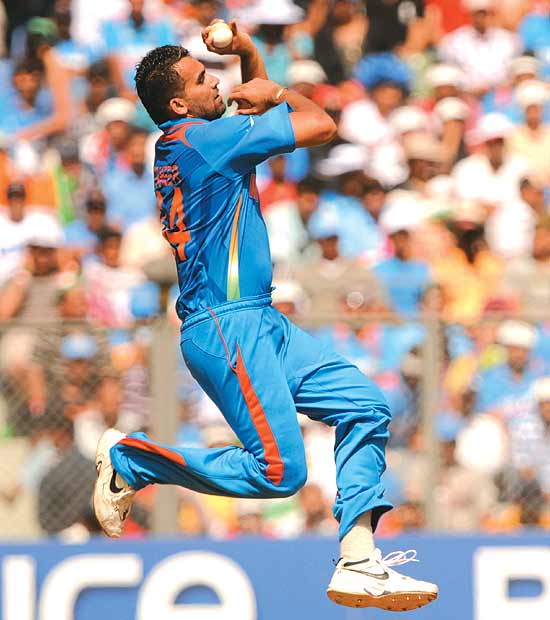 Had he not been injury-prone, Khan’s statistics would have been far better. Injuries often rendered him hors de combat and he missed at least 25 Tests and 50 ODIs. Besides his own personal loss, it was India’s, too, for he was our trump-card, nay a potent weapon, as a fast bowler.

Khan, who bowled 51 overs in his last Test innings more than a year ago, and consumed five Kiwis for 170 runs at Wellington, retires with the distinction of being
??the finest and the most successful left-arm pace bowler in the history of Indian cricket.

Fast bowlers usually hunt in pairs. They are more successful when bowling in tandem. But Khan had been alone for almost throughout his chequered international career.

He could not forge a pair for want of a regular partner at the other end. An assortment of new-ball bowlers played for India when Khan was around. None of them found a permanent place in the team.

Manoj Prabhakar may have been the first Indian bowler to practise the craft of reverse-swing. He may have taught a thing or two to even Kapil Dev about it. But it was Khan who perfected the reverse-swing and elevated it to an art form in Indian cricket.

Khan had mastered the reverse-swing so well that he would often use it tellingly on the docile pitches of the subcontinent, particularly India. Unsurprisingly, he was called the Wasim Akram of India.

Like Akram, Khan was capable of swinging the ball crazily on helpful wickets; and reverse-swinging the cherry when it was old. If only Khan had a partner like Waqar Younis, who used to share the spoils with Akram. For Khan, this role was often played by the fastish leggie Anil Kumble.

In the fashion of the bowlers of his trade, Khan could be both fast and furious, mean and magnificent, intimidating and inspiring. He was capable of generating express, lively speed even on wickets tailor-made for batsmen.

Apart from speed and swing, Khan’s tendency to sometimes catch the batsman by surprise with his awkwardly lifting deliveries fetched him plenty of wickets. In more ways than one he was a complete fast bowler. There were many things to admire in him, not just one or two.

Khan was as much a feature and flavor as many other members of the great Indian team led by Sourav Ganguly that scaled dizzier heights of success in the early 2000s – making it to the final of the ICC Knockout Championship in Kenya, winning the NatWest Trophy, drawing the Test series in England and Australia, triumphing in Pakistan and reaching the World Cup final in South Africa.

The 33-year-old Khan’s was a stellar show in India’s triumph in the 2011 World Cup under Dhoni. If anything, he took 21 wickets in the tournament. Whenever he was pressed into service, Khan dealt an important blow or two, whether bowling with the new ball or the old.

Ideally, he should have called it a day after this greatest moment of his career. He had achieved everything in cricket and had nothing to prove to anybody. He was already plagued by injuries. But, like Sachin Tendulkar, Khan also decided to prolong his career after April 2, 2011.

They may never agree, but the fact remains that Khan and Tendulkar did not do anything extraordinary in their respective disciplines to enhance their reputation. Both seemed to be playing on their past reputation and looked like shadows of their own brilliant selves more often than not.

In all, Khan figured in 14 Tests, 9 ODIs and 5 Twenty20 games after the World Cup glory. He was never the same bowler again but appeared to keep pushing his body’s limits. But this is not difficult to forget.

What is harder to forget is Khan at the pinnacle of his prowess and the sight of him bowling at a lively pace, swinging the ball in and out, often reverse-swinging the white and red cherries, and troubling, flummoxing and actually dismissing the top, frontline batsmen of the world.

Khan was the last champion fast bowler from this vast, cricket-mad country. Though he has inspired a whole generation of fast bowlers, it may take years to come across someone who remotely resembles the handsome, peerless Khan.