Zaira In A Dangal With Goel Over His 'Veiled' Remarks

Dangal girl Zaira Wasim was forced into a dust-up with Vijay Goel on Twitter who likened her to a Muslim woman while appreciating an artwork... 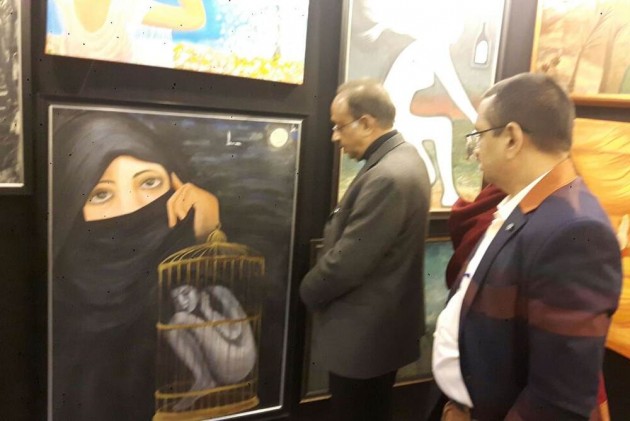 Dangal girl Zaira Wasim was forced into a dust-up with Vijay Goel on Twitter who likened her to a Muslim woman who has broken free of societal restrictions while appreciating an artwork that equated a caged woman to hijab-wearing Muslim.

The 16-year-old who received a lot of accolades for her depiction of Geeta Phogat in the film was recently bullied by a section of Kashmiris for meeting Jammu and Kashmir Chief Minister Mehbooba Mufti who described her as a role model.

@VijayGoelBJP Sir, with all respect to you, I feel I must disagree. I request you not to connect me to such a discourteous depiction. (1/3) https://t.co/BIgWVstqZh

@VijayGoelBJP Women in hijab are beautiful and free (2/3)

@VijayGoelBJP Moreover, the story depicted through this painting is not even remotely relevant to mine. (3/3)

In a series of tweets she said: "I feel I must disagree. I request you not to connect me to such a discourteous depiction."  And that she failed to draw a connection between the artwork and herself.

"Moreover, the story depicted through this painting is not even remotely relevant to mine."

The BJP leader, waking up to his folly, tweeted back to Wasim saying that his comment was in good health and that he has been misunderstood.

You have interpreted wrong. I appreciated your work and stated that evil and patriarchal notions must be discouraged. https://t.co/OPBy5EZifN

I'm afraid you still haven't understood. But I wish you all the very best and appreciate your work. Hope to meet & interact too. https://t.co/h2RK3K3zIB