The BJP government is beginning to show acute signs of fatigue… 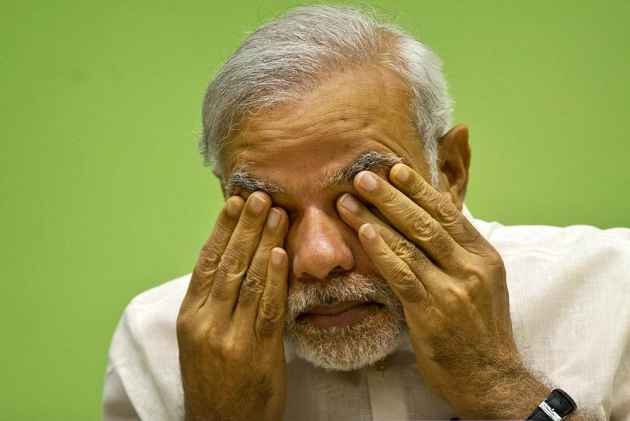 Walk the talk has been a popular TV show hosted by a print media editor, but talking while walking leads to breathlessness. Prime Minister Narendra Modi who is lugging the Gujarat model from his parent state to Delhi is beginning to show (along with his government) acute signs of fatigue. The fabric to develop India from swadeshi 'yarn' is already fraying at the edges.

Fables are all very well for the masses, but they curdle when facts are added. The 'shaala praveshotsav' is a high-profile programme initiated by Modi over 13 years ago in Gujarat. It entailed every public servant, in fact the entire government, going out in the field to ensure child enrolment in schools. It was a sarva siksha abhiyan of sorts as the state pulled out all stops to ensure improved and comprehensive education. Coupled with a variety of such measures and high-voltage publicity, it was made out that the state was now a frontrunner in the field.

The fact is that Gujarat spent merely 3.3 per cent of its state gross domestic product (GSDP) on education. And this was one of the lowest levels among the top 20 states during a period between 2007-08 and 2013-14 (Modi rule), according to a study conducted by the Associated Chambers of Commerce and Industry of India (Assocham). While Bihar and Assam (11 per cent) both ranked tops, Gujarat incurred least expenditure on education sector development in recent years, it noted.

Here's the fallout — the pass percentage of the class XII results of the Gujarat Secondary and Higher Secondary Board (GSHEB) fell to a 22-year low of 54.98 per cent. The ignominy of the situation was that this percentage was achieved by giving 18 grace marks to one lakh students. The actual percentage was a disgracefully low 37 per cent.

The Gujarat Model now stands truly replicated at the Centre. The school education budget of the Modi government has been scaled down to Rs 42,219 crore in 2015-16 from Rs 55,115 crore in 2014-15. Similarly, the confusion on the new funding pattern devolved by the BJP government for flagship programmes like Mid-day Meal and Sarva Siksha Abhiyan are putting them under severe strain.

The plight of woman and child welfare programmes under this government elected on a development plank is pathetic. The plan outlay of the women and child development ministry was Rs 21,000 crore in 2014-15 and has been sliced by half to Rs 10,286.7 crore this time. This strikes at the very root of the Integrated Child Development Scheme (ICDS) implemented through 13.42 lakh anganwadis countrywide.

Take the case of the Rajiv Gandhi scheme for empowerment of adolescent girls. The demand was for Rs1,476 crore. It has got a paltry Rs 75.5 crore this year (less than a shameful 10 per cent). In the face of such incriminating evidence what is 'beti bachao, beti padhao (save the girl child, educate the girl child) except publicity gathering, pulpit sermons. Whatever happened to women's emancipation and child welfare?

Interestingly, a study by a financial watchdog (Global Financial Integrity report dated June 2015) states that the black money generated in India was 120 per cent more than the government's yearly education spend and 101 per cent more than its health expenditure. According to an estimate the illicit financial outflow at about $44 billion annually works out to $440 billion over the decade!

The BJP's pre-poll boast of bringing back black money stashed abroad in a 100 days and subsequent recant notwithstanding, USA has successfully arm-twisted India into signing a highly unequal Information Gathering Agreement (IGA). A Modi government salivating at the prospect of getting access to sensitive banking information about ordinary Indian citizens in the US, has agreed to give the American government information even of non-US entities operating in India, if it has even one American working for them.

In actual terms this means that the Indian government will be duty bound under the agreement to provide information about any Indian company or organization to Washington (if asked for) if it has an American on its rolls. The quid pro quo is that the Modi government will get deeply personal banking information of ordinary Indian citizens in the US for use as it deems fit. Highly placed sources say that the first round of information on the US-based Indians pertaining to 2014 is expected to be delivered by September this year.

This barter, in hindsight, will prove a disturbing development for all those Indians in that country who rolled out the red carpet for the new Prime Minister during his visit to the US.

The sequel to this development is the enactment of the foreign Accounts Tax compliance Act (FATCA) by the Obama government. Under this law, the administration seeks to gather banking information about Americans and even non-US firms that employs them the world over through punitive measures. One hundred and twelve countries were pummeled into submission by the US through the simple expedient of imposition of a 30 per cent 'withholding tax' on their respective banks on all payments routed through them. The crux of the matter is that the Americans have managed to get far more than they have agreed to give.

Thus it is that the overblown chest and the flexed muscles seem more faff than fibre. High on pronouncements and publicity, the Centre is lagging behind on most other parameters